Canonization of the Piarist Faustino Míguez 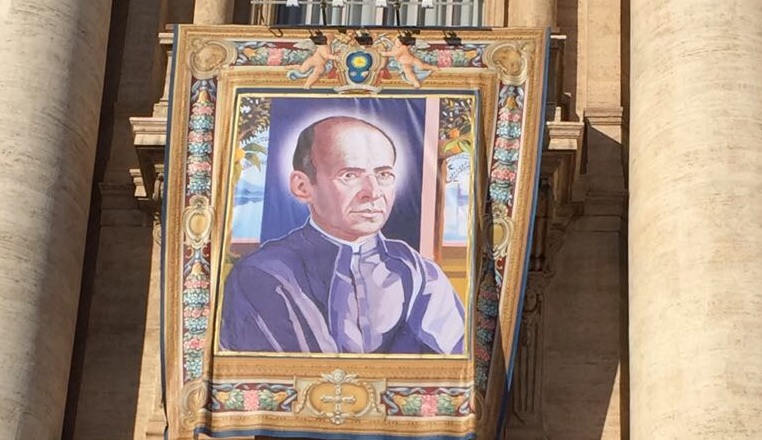 This morning, under a stunning sun, the proclamation, by Pope Francis, of the new Piarist saint, Saint Faustino Míguez, founder of the Calasanctian Institute – Daughters of the Divine Shepherdess took place. Saint Peter’s square gathered thousands of pilgrims and a large part of the Calasanctian Family, which was able to attend the celebration along with the Pope, coordinated by the Postulator of the Pious Schools, Fr. Andrés Valencia. Thus, the Calasanctian sisters Julia García Monje, Patricia de el Carmen Olivares, Punam Dungdung, Mª Luisa Domínguez and  M. General Sacramento Calderon participated in the readings and offertory, in which participated also the person who received the miracle of Saint Faustino, Verónica Stoberg and her family. On the other hand, the Piarists participated in the persons of Bro. Gerardo Leyva who read one of the prayers, and the acolytes Ľuboš Tkačik (Slovakia), Tommasso de Luca (Italy), Yeremias Isaias Laga Mukin (Indonesia), Łukasz Czub(Poland), Dániel Szab)( Hungary) and Borja de la Rua (Spain) who helped in a simple ceremony, in which the Pope encouraged attendees to understand their Christian life as “a story of love with God”, where no one has an “exclusive invitation”. Thus, he commented the Gospel parable of the wedding banquet, to remember that God “is not resigned, but he is inviting. Against the ‘no’, he does not slam the door, but he includes even more people”. In a letter, the Congregation of the Pious Schools highlights in the new Saint Faustino “his life simple and delivered; his vocational fidelity; his boldness in the mission; his deep trust in God’s love; in short, his holiness, are reason for all of us, and now for the whole Church, of a deep and sincere thanksgiving to God”.

After the celebration, the Calasanctian Family had a meal of fraternity that brought together more than 1,200 pilgrims and which was presided over by Cardinal and Archbishop of Madrid, Carlos Osoro. M. Sacramento Calderón encouraged to deepen in the following of Saint Faustino Míguez with the conviction that “holiness calls to holiness”. The meal was livened by the bagpipers of the Ourense Government group and by young alumni of the Calasanctians of Buenos Aires that interpreted a couple of scenes from the musical “The Life formulas” which they premiered at the reception the day before with great success.

Glory be to God in Heaven.