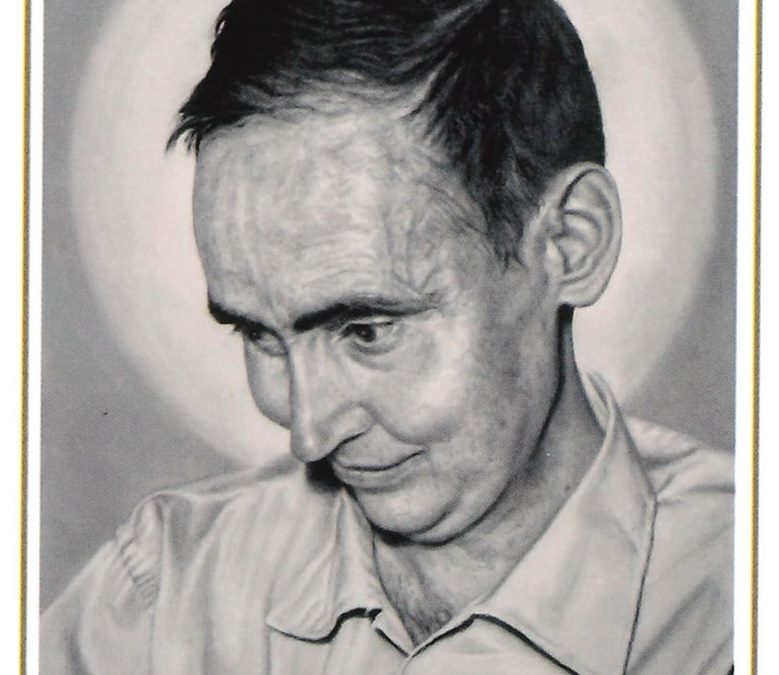 Between September 5, 2020, the anniversary of baptism and June 12, 2021, the eleventh anniversary of the Beatification of Manuel Lozano Garrido, “Lolo”, in the diocese of Jaén, a series of events have been held between Linares, city of birth and Jaén, reminders of the Centenary of the birth of “Lolo” and which have been closed with a solemn Eucharist in the cathedral of Jaén presided over by its bishop. D. Amadeo Rodríguez Magro on Sunday, June 13, 2021 concelebrated by about thirty priests including two Piarists, Fathers Hipólito de la Cruz Fernández and Fr. Juan Martínez Villar. In the presbytery of the cathedral was the urn with the remains of “Lolo” who for nine days had presided over the high altar.

“Lolo” student at the school of the Piarists of Linares

Manuel Lozano Garrido, “Lolo” was born in Linares, olive and mining city of the province of Jaén, a city surrounded by olive trees and mining chimneys, on August 9, 1920, in a family of Christian tradition and was the youngest of five brothers. There were two others who soon left.  The Piarists, after closing the school of Úbeda in 1920, moved, that same year, to Linares, a nearby city and founded there the school of Our Holy Father “José de Calasanz”, with some Piarists from the school of Úbeda, the Rector Fr. Celestino Moreno and Br. Antonio Herrero and five others of different origins sent by Fr Provincial, Clemente Martínez. In this newly founded school is enrolled “Lolo” because, his older brothers also attended it. Almost newly admitted and, when he is six years old, his father dies, a detail that some Piarists will remember later. “Lolo” will carry out in this school of the Piarists the studies of Primary and in it, on May 9, 1929, he made his First Communion. In the mornings he went with his brother running to school to get there fast and have time to play football that he liked a lot and did quite well, especially on the left winger. The same thing happened at lunchtime because, it was of the “basket students” who took the food from home and heated it in the kitchen of the school. The meal was soon done to make time for the ball. In the school he belonged to the group of scouts that used to be in the schools of Piarists with which he took advantage of his outings to the field and discover and love nature and sometimes find archaeological relics and Roman coins. He participated in the religious practices of the school such as the daily rosary, the month of May dedicated to the Virgin and in frequent confession as desired by St. Joseph of Calasanz and his brother tells. In that Piarist school at that time were Fathers Aurelio Isla, Matías Díez, Juan José Lara and others. The latter who exceeded one hundred years, being of community in Pozuelo, already very old, still kept memories of him.

After primary school he went to continue his studies at the Institute. Already at home and after a student at school, he began his mission of apostolate, as later the Spanish priest and journalist José Luis Martín Descalzo wrote of him when he met and visited him in his house in Linares already very ill: “he was dedicated to being a Christian; he dedicated himself to believing.”

Who was Manuel Lozano Garrido, “Lolo”?

He describes himself thus:  … “My record could be this: 39 years old. Single and Andalusian. Teacher. Invalid for almost eighteen years. Rheumatism. My life is confined to a room, with only one annual outing. My room is bedroom, living room and workplace at the same time… I do something. Every day I spend a few hours filling in quatrains… Sit a man in a rigorous posture of four (4). Your hands will rest slightly on your legs, with strickled fingers, like the one holding a coin. Bowed head…”

After those primary studies in the Piarists of Linares he enrolled in the Institute of Secondary Education of Linares and almost at the same time of starting the studies of High School, he enters to form part of the Aspirants of the Catholic Action in which his vocation of following Jesus will be forged and in which he will remain until his death. His childhood and adolescence remind the words of Calasanz in the Proem of his Constitutions: “For if from childhood the child is diligently imbued in Piety and Letters, it must be foreseen, with foundation, a happy course of his whole life”. His Christian and apostolic experience is manifested in the identity card that he will write later already embracing the wheelchair: “Do to sit at the table of sincerities and you yourself go filling in the identity card. From name you get Man and these are the surnames you should write: Free, Lover, Immortal. Son: of God. Profession: Generosity. Of photography, you stamp the heart, and you sign everything with letter of faith and signature of hope”

His walk through life was not very long, but it would be very long to narrate it. The Spanish Civil War (1936-39) reaches him with 16 years in which he does not hide his status as a member of A.C. and like other Tarcisius clandestinely carries the Eucharist to the prisoners which will cost him to spend a night, that of Holy Thursday, in prison. Later (1942) he is mobilized and while in the army he is visited by the disease that gives rise to the physical evil that would end him. He returned home with a progressive paralysis that sat him in a wheelchair, giving him total immobility and preventing him from a paid job.

In 1958 he made a pilgrimage in a wheelchair to the sanctuary of Lourdes and upon returning from it he launched his pious work, the magazine Sinaí, center of apostolate among the sick with monasteries of contemplatives and incurable sick praying for journalists. (Today up to 52 monasteries and 600 nuns pray their prayer for journalists) When he comes to total disability, he changed his life and “from his wheelchair he becomes a writer and fruitful journalist: 9 books, hundreds of newspaper articles that are for him the channel of his evangelizing eagerness. His house becomes a center of orientation, joy and vocation for many young people.” On one occasion when the Eucharist was to be celebrated in his room he said and wrote:

“Why now? You are crazy?

“Yes, go; quickly. You bring it and put it under the table, so that

the trunk of the Cross is keyed on the keyboard and casts its roots right there”.

As a sign of his desire to write from God. Fr. Roger de Taizé visited him at his home in Linares and wrote on the lamp of his table:“Lolo, sacrament of pain”

In 1964, to his disability “with his hands swollen, on his knees together“, is added blindness, but this will not prevent him from continuing his apostolic work as a writer for what he will now use a tape recorder. Illness and blindness in his later years continue to crush the wheat of his life until it becomes the Eucharist and, on November 3, 1971. “Lolo” dies in Linares while praying the Lord’s Prayer with a priest.

To his own, to his countrymen, to the followers of Jesus“the last two services he offered were: Sick and writer.”

“On June 12, 2010, the Church proclaimed Blessed –Pope Francis will say in 2019 in the Address to the Catholic Union of the Italian press– the first lay journalist, Manuel Lozano Garrido, better known as “Lolo”. Despite the illness that forced him to live twenty-eight years in a wheelchair, he never stopped loving his profession. Really a good example to follow!” And in the Message for the 55th World Day of Social Communications, Francis himself quoted the words of “Lolo”: “Open your eyes as to what you see and let the bowl of your hands be filled with wisdom and freshness, so that others may touch that miracle of throbbing life when they read you.” Benedict XVI, the day after his Beatification in Linares, and from Rome said: “Journalists will be able to find in him a testimony of the good that can be done when the pen reflects the greatness of the soul and is put at the service of truth and noble causes” (1920).

The Bishop of Jaén, D. Amadeo Rodríguez Magro, in the Eucharist of Thanksgiving in this Centenary said: “This anniversary has to serve as a memory of Lolo, but, above all, of reflection of how he caught the truth on the fly and wrote it”.

Lolo was an example of a “journalist going forth” who knows how to land in the everyday, in the day-to-day experience. “Blind man who sees everything, journalist who tells everything, invalid winner of the Olympiads of faith“.

Certainly to approach the figure of Lolo who thought and wrote:“For God who is the first fan of every man, we are all chosen”,  it is necessary to approach through what he left us written in his books: “The wheelchair “,”The Round table with God“, “The swallows never know the time“, “Letters with the Sign of the Cross“, “God speaks every day” (Diary of an invalid),”We are all chosen“, “Welcome Love“,  Reportage from the summit “, “The naked tree”, “The stars are seen at night”  (posthumous diary),  stories,  articles,  letters(…).

His vocation as a layman committed to a Church going forth

His literary side as a journalist and writer

His Christian experience of the disease

His Eucharistic and Marian devotion

His accompaniment of adults and young people