Chronicle of the Solemn Voting Course: in Rome 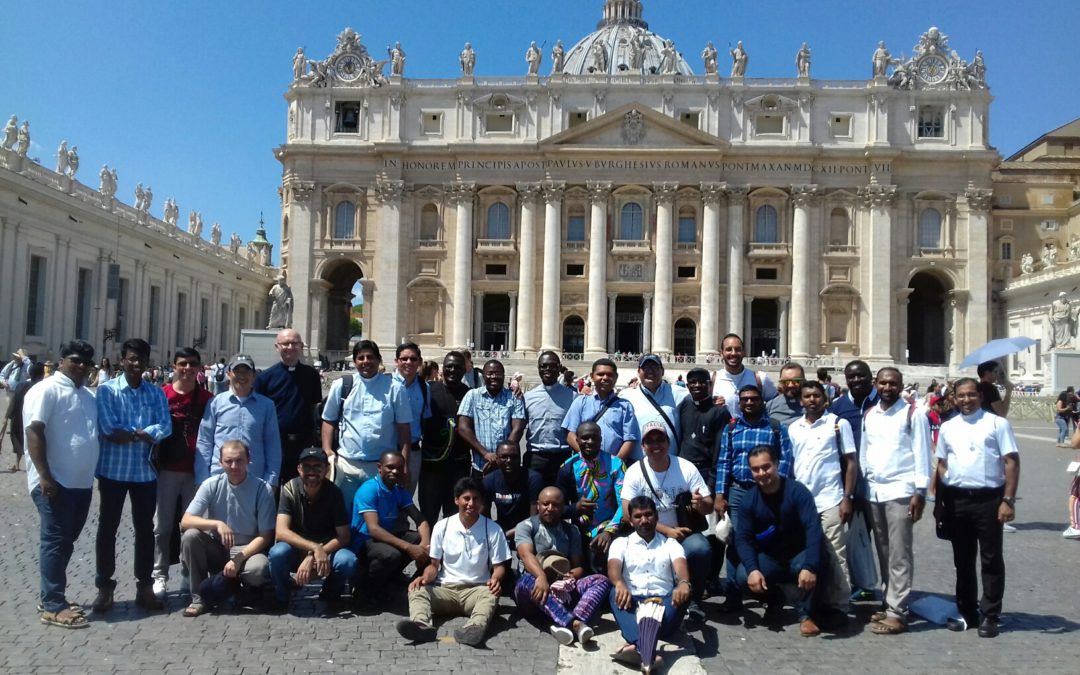 We are in Rome, Italy, staying in the general communities of San Pantaleo and Montemario. Today we dedicate it to work with Father General Pedro Aguado in the house of Montemario, where we have heard about the “grow and live as Piarists, in the Pious Schools that seek more life and more mission, called to live intensely the centrality in Jesus Christ”. There were also moments to ask and share our reflections and experiences about our vocation.

In the afternoon Fr. General Pedro Aguado met with the Brothers who will make their Solemn Profession and will receive the Diaconal Ordination to refine details. Then the Mass was celebrated in the chapel of Montemario in Spanish and finally we had the presentation of the Province of Poland by our brothers David Bartochowski, Emil Grochowski, Przemylawlack Koi.

After breakfast in the community, we started the tour to know the whole general house and its history from the times of Calasanz to the present day.

Father José Pascual Burgués, historian of the Order, was the one who accompanied us and explained it in a very precise and exciting way. After getting to know the house, the Church of San Pantaleo and Saint Joseph Calasanz, the pinacotheca, the museum and the library, we start the tour through the streets of Rome to visit the Calasanctian places; we arrive at the Church of Santa Dorotea, the place where the Pious Schools were born to have the Eucharistic celebration presided over by Fr. Ashok Vara Kumar Talare of the Vice Province of India. We finish the tour of this day visiting the imposing and beautiful Basilica of Santa Maria in Trastevere.

We begin our day with the Eucharistic celebration in the chapel of Calasanz presided over by Fr. Ricardo David Rivera of the Province of USA-PR. We continue our guided tour and explained by Fr. José Pascual Burgués visiting the places of Rome where our saint passed, made a living, prayed, visited, etc.: Basilica of Santa Maria Maggiore, Basilica of Santa Prassede, Basilica of St. Pietro in Vincoli, Madonna dei Monti, Roman Forums, Card. Colonna Palace, Basilica of the Twelve Apostles, Trevi Fountain, Church of St. Mary Sopra Minerva (Dominican), Card. Giustiniani Palace, Church of the Stigmata of Saint Francis (Franciscans), and the Gesù Church (Jesuits).

Once the tour is finished, we return to San Pantaleo for lunch. The rest of the afternoon we had it free to visit other places in Rome.

We begin the day with the morning prayer to continue thanking God for all that we have received during these days. We now move to Vatican City to listen to Pope Francis in his Sunday message and to pray with him the Angelus. Once we finished the prayer, we turned to the community of Montemario to have the days of reflection with Brother Jesús Gergué of the Province of Brazil-Bolivia who shared with us his rich experience as a Piarist to strengthen our vocation for the solemn profession.

We conclude the day with the Eucharistic celebration presided over by Father Samson Ehemba of the Province of West Africa, who is also coordinator of the Solemn Voeux Course, in French language.

We are again in the Community of Montemario to continue the talks of Brother Jesús Gergué throughout the morning and a few hours in the afternoon. At the end of his interventions, there was a time to share the echoes and reflections that arose. The Eucharistic celebration of the day was presided over by Fr. Ricardo David Rivera in Spanish. In conclusion, we appreciate the presentation of the Province of Italy animated by our brothers Francesco Pandolfi and Yeremias Mukin.