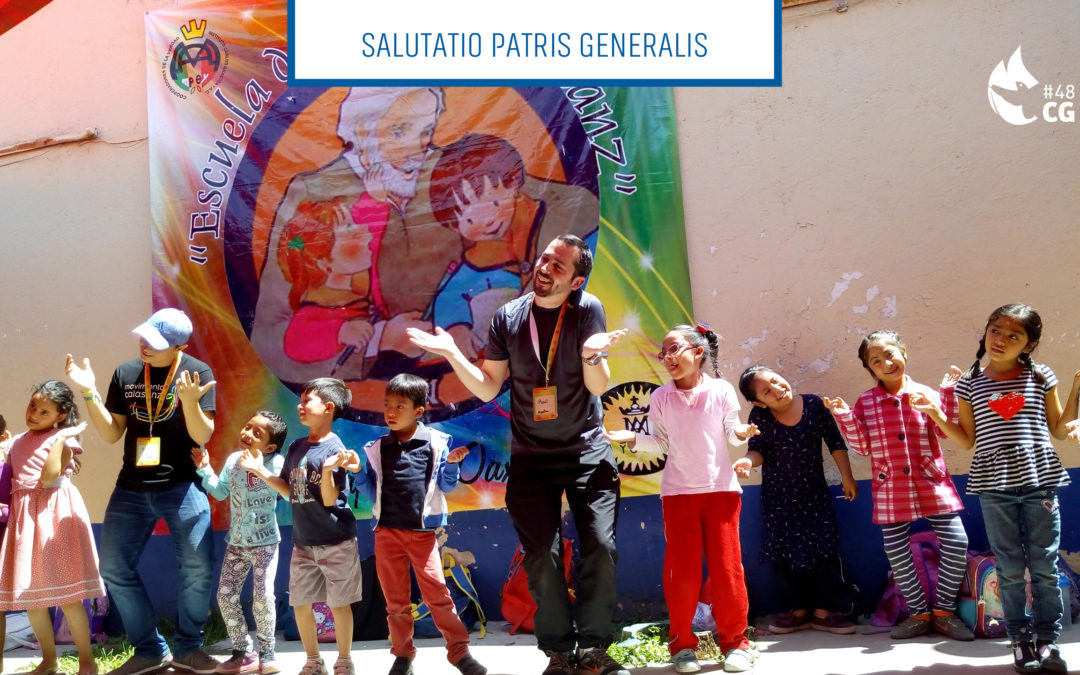 These are the three verbs that Calasanz uses in the Memorial to Cardenal Tonti to express his deep conviction that it was necessary for the Pious Schools to be configured as an Order of Solemn Vows. They are three precise verbs, clear and meaningful. I think it is good for us to explain the content of the first of the thematic cores of our next General Chapter, which we will celebrate, God willing, next July: the “construction of the Pious Schools”.

Calasanz says: “Proved the usefulness and necessity of this work, comprising all people and conditions and places, all basic instruction and all means to live, is thus demonstrated the need to constitute it stably as a Religious Order, so that at no time it will disappear (…) Consequently, it is necessary to expand and propagate it according to the needs, desires and instances of so many.”[1]

Calasanz configured the Order firmly and gave it the first impulses to grow progressively, at the service of the educational ministry. At the time of the reduction ordered by Pope Innocent X the Order had 500 religious, 5 provinces and  37  houses, most of which were schools. It was an extraordinary process of building the Pious Schools.  After the papal decision, the Piarists went on, fighting for the restoration of the Order. Undoubtedly the keys to this restoration are contained in the message of the founder that we all know: “Keep working for the children, trust in God, stay united and do not lose joy”[2]

From our faith, we believe that the love of God, the protection of Mary and the intercession of Calasanz are the root causes of the restoration of the Order. Without a doubt, there were also some factors that helped in this process. Our historians highlight, among others:  the pressures of the civil authorities, who were convinced of the need for the Pious Schools in their states, including the Catholic educational response to Protestant Europe; the struggle and effort of the Piarists, who did not give up or withdraw, but kept going as requested by the founder; the permanent prayer of the Piarists; the appropriate and progressive ecclesiastical efforts, which favored a climate favorable to the Pious Schools; the clarification of the internal situation, with the abandonment of those who were to leave and the entry and perseverance of those who really wanted to live the charism of the founder, etc.

But the task continues. And it will continue. We Piarists continue to build the Pious Schools, with the favor of God and with daily effort, with persevering patience and fortunate daring. The keys to this work remain the same: the desire to respond to the Lord’s call, the figure and charism of Calasanz, the need of education for all, the conviction that the Pious Schools are an instrument of the Kingdom, etc. The list of reasons would be endless.

In every historical moment, new tones appear from which our effort for better Pious Schools takes on new challenges. Our next General Chapter is called to name these new tones, those calls that we receive and to which we must respond. I do not intend, in this Salutatio, to refer to them all, because I would not be able to do it. I just want to share with you some of those “touches” (I learned that word from one of our pre-novices in Quito)  with which reality moves us. Let’s go.

Throughout the six-year period, important aspects of the Order process have appeared, and important aspects of it have been the subject of work in meetings, conferences, etc. Among them, the challenges of interculturality and inculturation; the progressive consolidation of the new Provinces; expansion in some new countries and in others where we are already, with new works and presences; the development and growth of vocational pastoral care; the dynamism of the participation of the laity; the ecclesial call to synodality  and which in our Order we have welcomed above all from the processes with young people; the integral sustainability of our presences, etc.

I believe that all these processes are dynamisms that demand and drive us as Order, and that offer clues to understand how the Pious Schools continue to consolidate, expand and spread according to the wishes and instances of so many. I would like to share with you four dynamisms that I consider fundamental.

The first I have called “to carry out a project of stimulating the Order”. I set a simple example to explain what I mean. Not long ago I received a circular letter from one of the major superiors of the Order in which, speaking of his Province and his responses to the pandemic of COVID-19, he said: “It is very pleasant and hopeful to note that it was the commitment to the great keys of life of the Order and the Province, which has given us the resources and tools to deal with the moment, perhaps, the more uncertain that we have had to live”.

I share with all of you an important conviction: working with a clear project, carrying forward our life and mission from options that are assumed by all and that are life-bearings (we call them “keys of life”) is absolutely necessary to be able to “consolidate, expand and propagate the Pious Schools”. Of the things that I most value of the General Chapter held in Hungary is that the Order was endowed with a clear project, which marked direction, and which was assumed by the whole of the Pious Schools.

On many occasions I have been able to share with you this reflection: the life of the Order will depend, firstly, on the love of God; secondly, on the authenticity of our Piarist experience and, thirdly, on our approach to decisions and choices. Well, the “project of stimulating the Pious Schools” is part of this third key: to provide us with a clear plan from which to walk.  Our next General Chapter may not need to do another complete project, but yes, sure, it must mark the direction from which to walk in each of the keys of life that we have assumed.

The second dynamism I have called “understanding the challenge of our Piarist reality“. Certainly, there are many calls we receive from the diverse and plural social reality in which we live. I am not referring now to those calls, but to those that come from the “Piarist body”, from our own reality, and which need to be understood, interpreted and integrated into the project of the Order.

I give some examples: the growing and unstoppably intercultural composition of our demarcations; the clearly diverse process of our four circumscriptions and which requires us to think about what each can contribute to the Piarist development of the others; the growing number of young people who knock at our doors to be Piarists and who need demanding and complete training processes; the process  that we are driving from the key of “Pious Schools Going Forth”; the formidable development of the Calasanz Movement; the dynamism of the Fraternity; the incessant call to vocational authenticity in all its dimensions, etc. The Order throbs, and its palpitations indicate life, direction, choice. It is very important to “listen to her” and respond to what emerges within her bosom as gifts of the Spirit.

I ask a few questions thinking only of one aspect, that of the development of the Order on each continent:

There is a third dynamism to which I want to refer, and which I call “listening to the sense of the Church“. Listen to the Church, as children, and answer her calls, as apostles. This is the challenge. We do not need “very specialized antennas” to detect the calls the Church is directing to us. They are very clear. Let us cite some in “Piarist response” dynamics.

There is no doubt that these and other calls will be the subject of our chapter work. We will not be able to address all of them, because it would be impossible to do so with proper depth, but what we will have to do is “listen to the Church” and respond as Piarists.

And the fourth dynamism that cannot be lacking and that I name in this way: “responding to the  real challenges of children  and young people.”   Calasanz set up his Pious Schools in response to the reality of children, to their need for instruction to get out of poverty and marginality; to the challenge of proposing a future not linked to  their  cradle, but to work and effort to grow; challenge to help them live from a life open to faith and sustained by it. He did not found the Pious Schools from a “fallback” mentality, doing something that no one did until someone – for example, the state – did. Calasanz gave a comprehensive response to a comprehensive challenge. And today it is still necessary to respond in the same way.

Therefore, if we want to respond to what children and young people need, we have to continue to defend our project, and make it grow, also in the face of mentalities and policies that claim that it is no longer necessary or that seek the way to distort or control it; we must strengthen it, from the keys and characteristics of Piarist education; we must enrich it from challenges that are more current than ever.

Among these challenges: the right to education for all; an education carrying answers to the desire for meaning of life that young people are asking for; a comprehensive education that accompanies the faith process of our youth; a commitment to quality especially where there are fewer means and more needs; educators who really feel a vocation to educate, etc.

I think that these four dynamisms should be very present in our chapter reflections, and during the next six-year period. They are options of “construction of the Pious Schools” that we must take into account to give accurate answers to the challenges that we have posed.

Let us ask God, our Father, to help us and inspire us in this process. Receive a fraternal embrace.