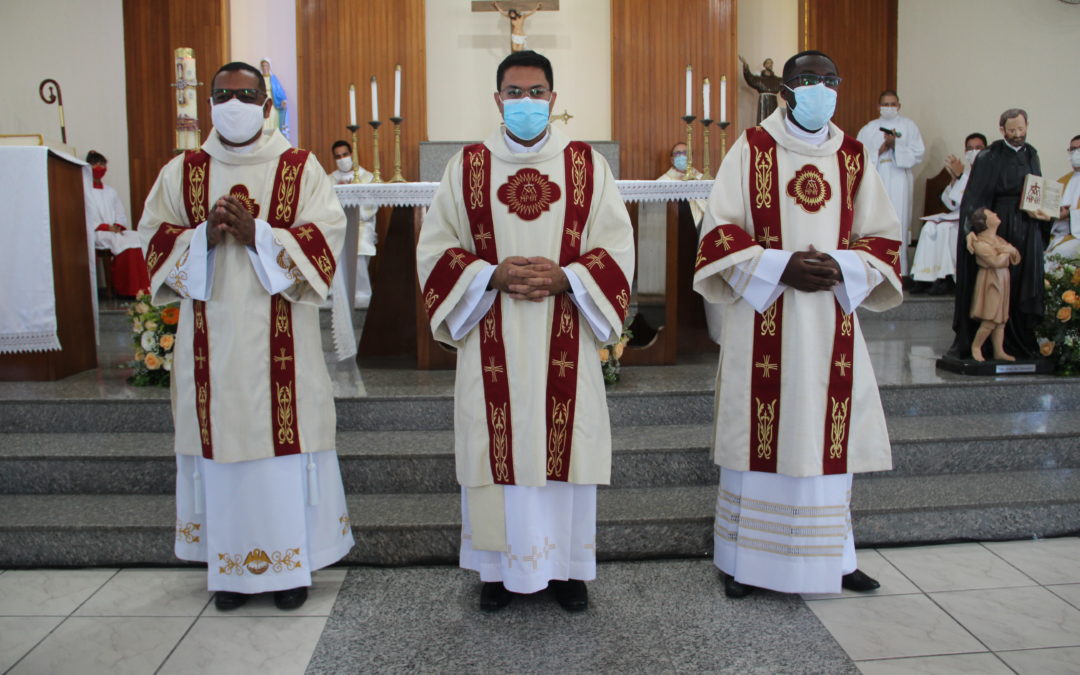 On Sunday, February 27, in the Parish of San Francisco de Asís – Laranjeiras – Serra – ES, the entire Piarist Family, together with the Fraternity and religious of all the presences of Brazil, Serra – ES, Belo Horizonte – MG, Governador Valadares – MG, Aracaju – SE and Araguaína – TO, and especially the Parish of San Francisco de Asís and Buen Pastor,  gathered to celebrate the Diaconal Ordination of our brothers Deibson Gouvêa, Sch. P., Frank Olivier Koffi, Sch. P. and Heyder Vieira da Conceição, Sch. P., whose hearts were resplendent and filled with holy Spirit and joy. In the transmission, we have the participation, in the media, of our Piarist brothers from Bolivia and West Africa and other provinces.

We are called to pour out our own life on the altar of God as a pleasing offering that reaches the merciful heart of the Father. The celebration was presided over by Monsignor Dario Campos, ofm, Metropolitan Archbishop of the Archdiocese of Vitória del Espirito Santo, who asked those present to help him assume the responsibility of accepting them in the transitional diaconate.

At the end of the celebration, Deacon Heyder Vieira da Conceição, Sch. P., thanked them on behalf of all and recalled the motto chosen by them, “full of compassion”, to accompany them in two special moments lived by them. In his words he showed the importance of having chosen this motto and expressed the feeling of committing himself to exercise the ministry of the diaconate doing good and being available to help everyone. Deacon Frank Olivier Koffi, Sch.P., thanked all those present and also the brothers and relatives of West Africa, transmitting this message in French with love and joy.

Called to be brothers in Christ, and with a heart overflowing with love, let us pray together for them and for the vocations that they have come to add within the Pious School and may Calasanz continue to inspire them in Piety and Letters.