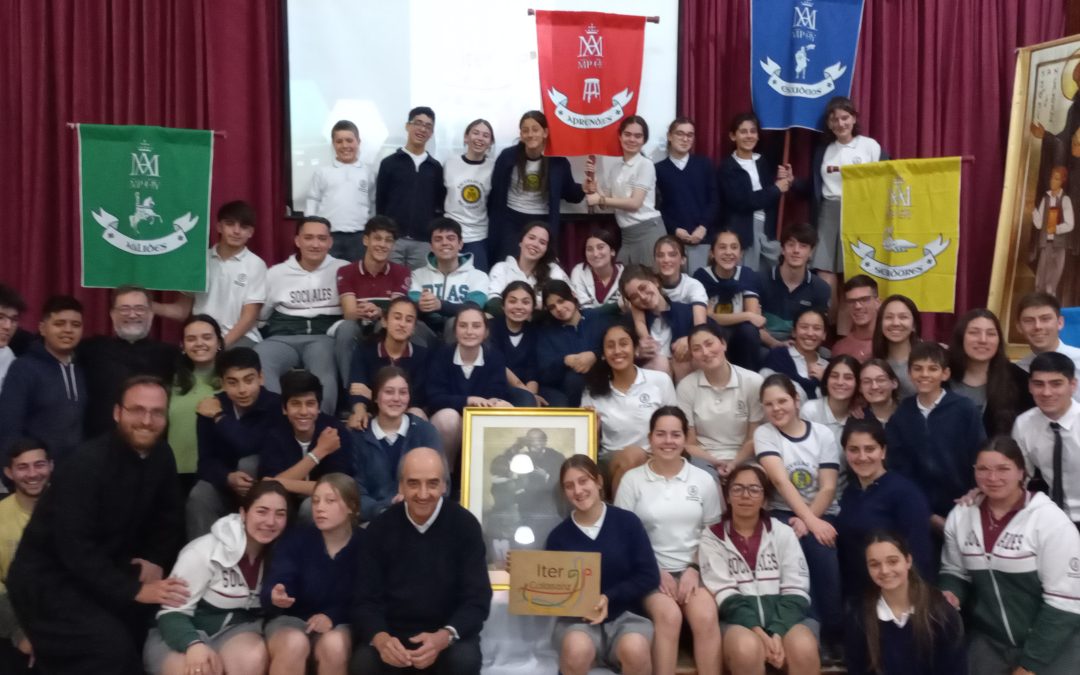 The Piarist School Santo Tomás in Córdoba, the Escuelas Pías School, the Perpetuo Socorro Parish, and the Calasanz School of Mendiolaza are the formative context of the twelve Piarist prenovices. At the same time, the communities of religious of the first two Schools are the Piarist support in the nascent schoolwork in the city of Mendiolaza, which will celebrate its first ten years of mission among children and young people.

In the same city of Córdoba, a training and social assistance space has been set up for children living in a very vulnerable area and at high risk of violence and material poverty. The Calasanz Home operates in the evening shift and welcomes children from the site to help them with their tasks, deepening their studies, food, and cultural and sports activities. The gift of service of many volunteers (mostly young students and alumni) makes this support a reality.

Fr. General’s fraternal visit continued in the Pious Schools of Rosario in Córdoba. The novices José Gabriel and Nicolás have their house of formation here, collaborating with the integral development of children and young people. This school context helps them to complete their spiritual and Calasanctian formation so that, in due course, they will profess to be children of Calasanz through religious vows.

On the other hand, upon our arrival in the community of Río Cuarto, Fr. Joaquín Espina, Br. David Renella and many other “Mentors” of the various Piarist presences of the demarcation prepared the meeting of the “Virtus” project that would be held in the house of Pontevedra. Fifty young people between 16 and 18 would live a week of cultural, theological, Christian, and Calasanctian training.

Afterward, Fr. General’s visit focused on the presence of Buenos Aires, where personal meetings with the juniors and the formative community framed the young religious’s joy and commitment during their maturation process in the Piarist mission. The Buenos Aires School was the camp where the young people of the “Virtus” project gathered to begin this path of formation. After an intense and fraternal dialogue with Fr. General, the young “Virtus” from all the Piarist presences of the Province thanked Fr. General for his presence as 9th. Generation that participates in this project.

Finally, the visit ended with a chapel-by-chapel tour in the parish territory attended by the Piarist brothers in Mar del Plata. The local community is recovering the Piarist presence both in the Parish and in a kindergarten school that welcomes more than a hundred children of very young parents who live a vulnerable dynamic. This kindergarten is about to celebrate 30 years of offering educational service to the little ones in the area.

Fr. General Pedro Aguado and Fr. Julio Alberto Álvarez are very grateful to the Piarist brothers of the Demarcation and hundreds of lay and fraternal collaborators for continuing to build the Pious Schools in this great country. Above all, we carry in our prayer the children and young people who make our mission the reflection of what Calasanz had as a conviction: “If you do not become as children, you will not enter the Kingdom of heaven.” Jesus has designated them as the key that opens the doors of heaven. Children and young people are the ones who, by directing their hearts to Christ in perfect charity, will contribute to transforming society’s customs and the Church. Thank you for all the dedication and welcome in this fraternal visit.