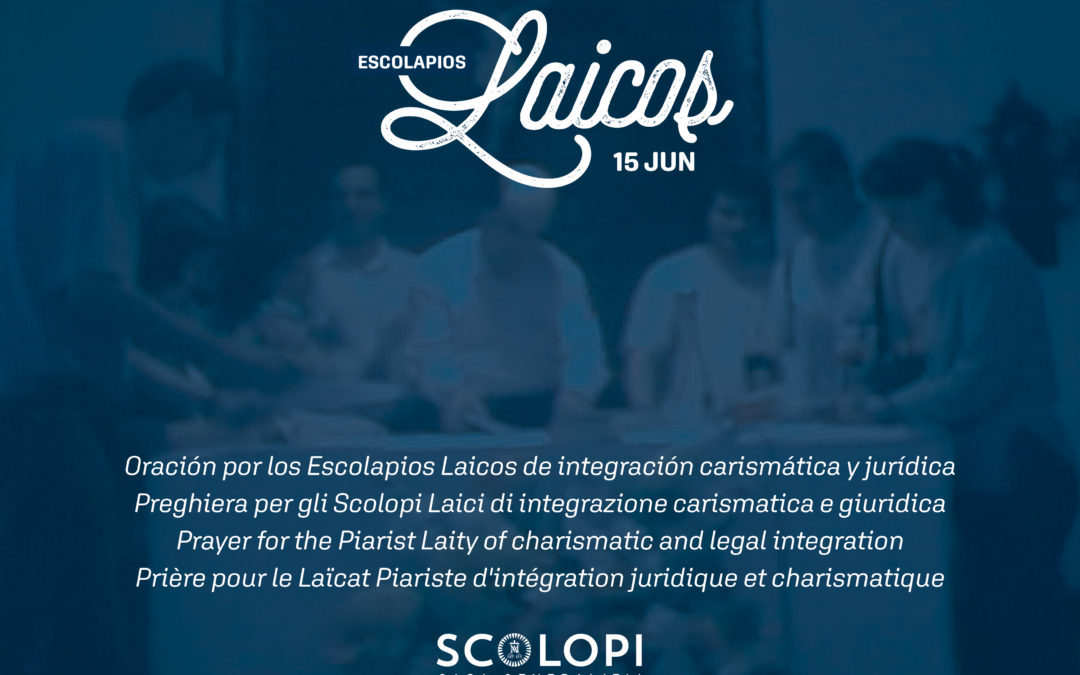 The Calendar of the Order invites us to pray on 15 June for the Lay Piarists with charismatic and juridical Integration. For this reason, we think it is important to explain what this form of belonging to the Order with two elements: one theoretical and one vital.

In Chapter 2 of the Directory of Participation on the Pious schools, approved by the 47th General Chapter and published by the General Congregation in 2015 and accessible through our website of Ediciones Calasancias (https://edicionescalasancias.org/cuadernos/), we have the following points that explain what this form ofparticipation consists of.

This approach of our Directory becomes palpable in the concrete life of twenty lay Piarists who have already made their definitive or temporary promise. For this reason we have asked Fr. Javier Aguirregabiria to present them to us to give him a face and a location in our Order and to make it possible for them and for all those who are in the process of discernment to opt for this commitment.

Currently all the lay Piarists (modality of charismatic and legal integration), are from the Province of Emmaús (Aragón, Vasconia, Andalusia) and, obviously all are in the Fraternity and collaborate with ITAKA – Escolapios, the school, etc. That is 20 in total, 13 with a definitive promise and seven with temporary year-over-year promise.

A couple in Mexico is in a moment of discernment about this vocation.

2-3. Loli Castro Quintela – Pablo Santamaría Herrera. Born on 25/ 05/1969 and 02/04/1969. They are married with two children (Ander and Irune). They now live in the Piarist community of Bilbao with four Piarist religious and the family we quote below. She is a teacher at the school and catechist in the Piarist Christian Community. Pablo is entrusted with pastoral ministry, is a presence coordinator, a teacher at the school, an educator of the Calasanz Movement and the ITAKA Fraternity Council. They spent three years sent to Valencia in Venezuela.

4-5. Alberto Cantero Calvo – Beatriz Martínez de la Cuadra García. Born on 04/09/1968 and 13/02/1967. They are a couple with three children (Garazi, Imanol and Zuriñe). They now live in the Piarist community of Bilbao with four Piarist religious and the family that we quoted in the previous paragraph. Alberto is the coordinator of ITAKA  – Escolapios in Emmaus, is the Secretary of the Board of Trustees and a member of the Executive Committee of the  ITAKA  – Escolapios Network, member of the Council of the General Fraternity and also of the one of Emmaus. Bea is a teacher at the school, catechist of the Piarist Christian Community, member of the Council of the Fraternity of Itaka. They spent three years sent to Barquisimeto in Venezuela.

6-7. Natxo Oyanguren López – Eba Rodríguez Zorraquino. Born on 02/02/1971 and 08/02/1971. They are a couple with three children (Mikel, Maite and Josu). They now live in the Piarist community of Vitoria with two religious and another lay Piarist (Fernando). He is presence coordinator, teacher at the school, coordinator of ITAKA – Escolapios in the city, educator of the Calasanz Movement. Eba is entrusted with pastoral ministry, is pastoral coordinator of the school and educator of the Calasanz Movement. They spent three years sent to Valencia in Venezuela and are now sent from Bilbao to Vitoria.

These seven are the first lay Piarists, since June 15, 2002. The day of prayer for the lay Piarists is celebrated on June 15 because this is the date of the promise of the first who assumed this vocation.

9-10. Teresa Muñoz Arbizu – Jakobo Rey Capetín. Born on 26/06/1976 and 16/01/1977. They are a couple with two children.  Teresa is a cooperator to ITAKA – Escolapios. Jakobo is the Principal Director of the school La Compassion – Piarists of Pamplona, and professor.

11-12. Alberto Tobalina Larrea – Iratxe Meseguer Pérez. Born on 23/02/1970 and 09/05/1980. They are a couple with three children (Markel, Andoni and Xabier). He is administrator of the School of Bilbao and responsible for the Sports Group of the school. She is minister of pastoral care, pastoral coordinator of the school, educator of the Calasanz Movement. He was sent to Valencia for three years in Venezuela.

15-16. Inma Armillas López – Alberto Márquez López. Born on 19/08/1982 and 17/03/1981. They are married with two children. She is the coordinator of ITAKA  – Escolapios in Granada, teacher at the school and educator of the Calasanz Movement. He is a physician and collaborates as an educator of the Calasanz Movement and in ITAKA  – Escolapios. They spent a year sent to Cameroon and also shared two years in the Piarist community  of La  Cartuja in Granada.

17-18. Elisa Martín Martínez – Salva Peregrina Hidalgo. Born on 18/09/52 and 09/04/50. They are a couple without children, unconditional collaborators in all the Piarist matters.

19-20. Igor Irigoyen Fuentes – Elena Pérez Hoyos. Born on 10/11/1975 and 20/08/1975. They are a couple with three children (Nazareth, Joel and Sara). Igor is the General Coordinator of the ITAKA  – Escolapios Network, Minister of Social Transformation, educator of the Calasanz Movement. She is an architect working for an agency of the City Council.

We have sometimes suggested that people who are sent by the Province and Fraternity to another country or other locality to boost the Piarist life and mission for a time, and even more so if they are sharing community of life with the religious, they are also lay Piarists in some way.

Currently they are sent and living in a joint community with religious, without repeating the lay Piarists mentioned above:

1-2. Caterina Yammin and Jesús Espínola, from Venezuela to Santa Cruz in Bolivia.

3-4. Fabiano Alves and Aline Rocha, from Governador Valadares in Brazil to Cochabamba.

5-6. Leonardo Henao and Nacil Castellanos, from Caracas in Venezuela to Santiago de Chile.

10-11. Santiago Casanova and Esther Morales, from Madrid to Salamanca (Spain)

May the Lord bless them and encourage them each day to continue to work for the sake of the children, youth, and families entrusted to them by building the Pious Schools wherever they are. 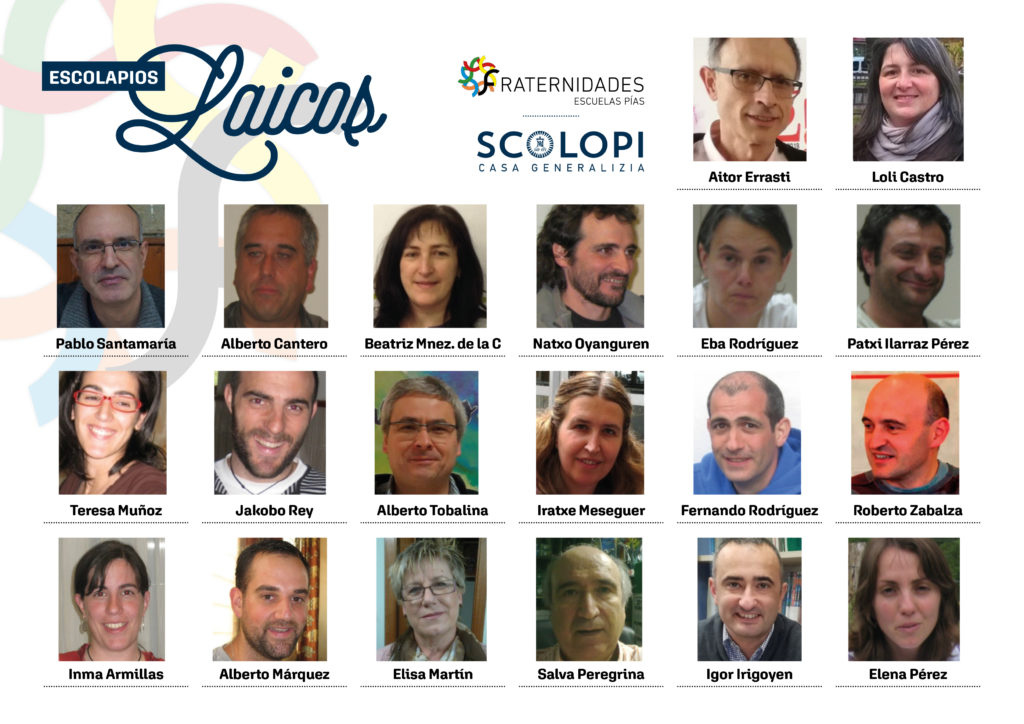 [1] This term of “lay Piarist” should be reserved for legal integration, classifying the other modalities as “Piarist laity” or with their corresponding term: co-operators or collaborators, members of the teams or itineraries of shared mission, brothers or sisters of the Fraternity.

[2] There is already an example, the Itaka-Escolapios network, a platform of shared institutional mission between Demarcations and Piarist Fraternities, which is a reality of charismatic and legal integration of great possibilities to promote the mission and so that the Order and the Fraternity can continue to advance together.