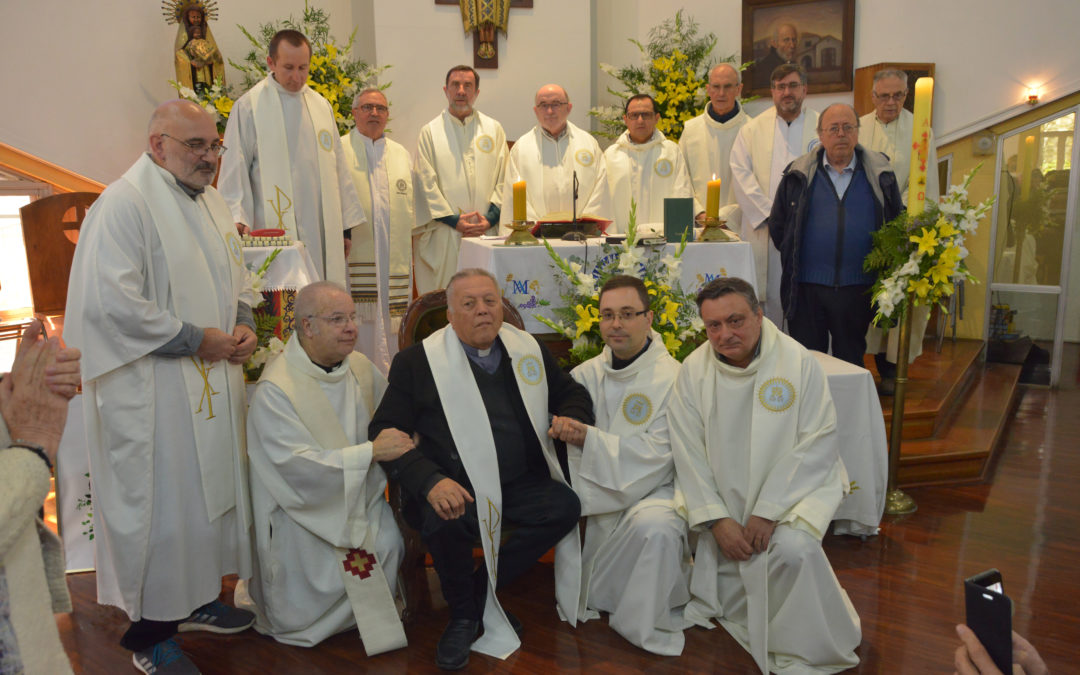 With the presence of more than 250 people, among them religious of the different communities, religious of the Calasanz Family, staff of the schools, friends and family, a Eucharist was celebrated in commemoration of the 50 years of priestly life or “Golden Jubilee” of Father José Antonio López Capó.

On May 23, 1969 Fr. José Antonio was ordained a priest in the church of the school HIspano Americano. In these 50 years he has guided, taught and accompanied many people in different schools and parishes.  The last 27 years has been linked to the parish Santa Luisa de Marillac de Barrancas and the School Instituto del Puerto of San Antonio, places where he has developed his pastoral and Piarist work.

The Eucharist was presided over by the General Delegate of the Pious Schools in Chile, Fr. Miguel del Cerro Calvo. He was accompanied by the religious of the communities of Barrancas de San Antonio, Santiago and Curarrehue.

During the homily, the work of Father José Antonio was recalled and highlighted. Fr. Miguel del Cerro reflected on the priestly commitment, which is given in three ways: as a Teacher, as a Pastor and as a Priest. In this regard, he referred to the value of acquiring and carrying this commitment in the Chilean Church today.

The Director of the Institute of el Puerto de San Antonio, Eduardo Santander, acknowledged with a wide “thanks, Father Jose Antonio” and recalled his work in the school highlighting his main qualities, such as the closeness with each one of the students and his availability to listen.

Fr. Miguel del Cerro read the letter sent from the Holy See with the greeting and the “Apostolic Blessing” of the Holy Father, Pope Francis, in “Occasion of the 50th Anniversary of his Priestly Ordination”. The certificate was beautifully framed.

After this significant moment, Fr. José Antonio was offered a wooden triptych , which contains the figure of Calasanz and children, all made on a bronze, copper and Lapis lazuli inlays.

The ceremony continued with a video that reviewed different moments of the life of Fr. José Antonio. The students of the school offered to those present a graceful “foot of Cueca”.

At the end of the Eucharist, people could approach to kiss the “consecrated hands” of Fr. José Antonio, habitual practice in the celebration of the one who turns fifty in is priesthood.

Then the present were invited to share a “Wine of Honor”, where Fr. José Antonio was honored by his beloved “Banda Instrumental”.