Presentation of book “A women’s Brotherhood in Rome. The Company of St. Anne in the Church of St. Pantaleo between the 17th and 18th centuries” by Alessia Lirosi 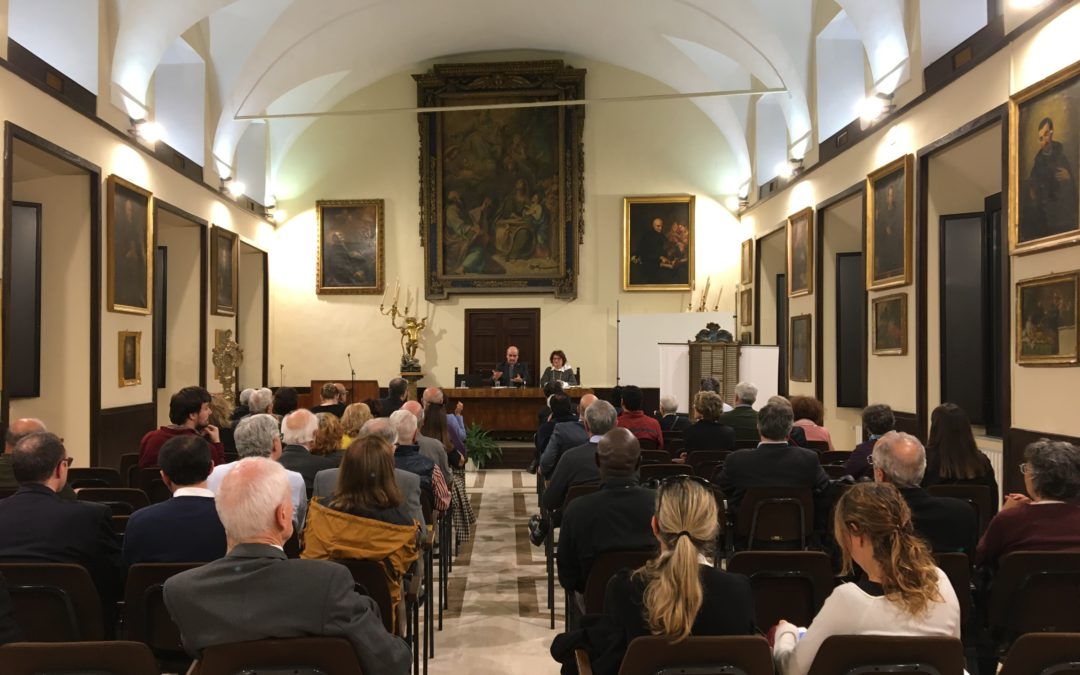 In October 2019 at the Pinacoteca of St. Pantaleo in Rome, the presentation of Alessia Lirosi’s book “A Women’s Brotherhood in Rome. The Company of St. Anne in the Church of St. Pantaleo between the 17th and 18th centuries” (Editions of History and Literature, Rome, 2019) took place. It is a study produced by about two years of research into documentary material of the Historical Archive of the General Curia of the Piarist Fathers.

The book illuminates in depth the world of women’s fraternities, giving ample space to the devotional, social and political and economic participation values that covered the seventeenth and eighteenth centuries, in their specificity of lay associations.

The Brotherhood of St. Anne was founded in 1640 at the Church of St. Pantaleo by St. Joseph Calasanz with the intention of favoring the devotional aspects of an association in which the affiliates belonged to the Roman aristocracy.

The archival research has revealed the Statutes of the 1700s of the Brotherhood of St. Anne, which clearly reveal the need to adopt rules for the management of the group and the proceeds from membership fees and alms. The Statutes of the 1700s are kept in a handwritten version and are included in the first part of the Register of a Volume that collects the minutes of the meetings of the Sisters. The title of these Rules is “Institute of the Congregation of St. Anne erected only for Women“, with the date of July 17, 1700 and then follow the definitions of the organization composed of “sisters” or associates, affiliates, substitutes. The government of the association was formed by the “12 perpetual consultants“, but they carried out their task with the assistance of the Father General of the Piarists at that time: this means that it was anyway planned a male figure in the supervision of the female fraternities. The associated who served as Superior of the Brotherhood of St. Anne assumed the name “Priora“, which was drawn by lot by the Prefect Father among the names of the 12 perpetual consultants and the charge lasted one year.

The meeting place was the Church of St. Pantaleo, where the relics of the Saint and the burials of some sisters are preserved. A work of great devotion of the Brotherhood was formed by the canvas with a Madonna with Child donated in 1688 by Aurora Berti Paradisi, a canvas that testifies to the enormous importance of the Marian cult for both the associates and for the Piarist Fathers themselves.

The documentary material testifies over time to the extension of the associated also to the layers of the Roman bourgeoisie and the specificity of the functions of the Brotherhood aimed at alms, support for widows and prostitutes but especially neophytes i.e. the converted Jewish women. The latter had to be followed and controlled even after Baptism through their process of integration into Catholic society.

This constituted a social and religious phenomenon that was strongly combined with the consolidated structure of ecclesiastical power constituted by the diocese, parishes, convents, monasteries, thus favoring the spread of Catholic doctrine. The study of the Brotherhood of St  Anne’s reveals that the devotional practices were organized with less magnificence than other male fraternities, probably because it was made up of women to whom the participation in processions or rites or night ceremonies that were widespread within the Churches and Oratories at the time was foreclosed. It should also be emphasized that the associates of the Brotherhood of St. Anne did not only play a welfare role but voted acts and decisions to be put into practice, always trying to negotiate their intentions not only with the Piarist Fathers but even with the Cardinal Vicar of Rome who was responsible for the control of all the activities of the Brotherhoods as Ordinary Bishop of the Roman Diocese on behalf of the Pope.

In addition to the specific analysis of the archival documents, the author also takes her study to the main meeting place of the associates of the Brotherhood of St. Anna. The altar dedicated to St. Anne in the Church of St. Pantaleo was made after the creation of the Brotherhood itself, supplanting an earlier altar dedicated to St. Catherine of Alexandria and in fact in Rome the title of altars dedicated to Sant’Anna appears constant between the seventeenth and eighteenth centuries.  On the altar of the chapel stands a canvas depicting Our Lady with her parents surrounded by a triumph of Angels. Little is known about this painting except that it was made by the painter Bartolomeo Bosi in the late 17th century, perhaps on commission of the Priora Eleonora Baroni. In the painting Sant’Anna shows a child Mary who reads a small book thoughtfully: the figure of St. Anne is punctuated as “educator” of the Virgin and the scene depicted was still a widely used iconographic subject in the modern age, although the depictions of St. Anne were more common and widespread in the act of teaching the Virgin to sew. It is indicated by the author of the book how this was designed to strengthen among women, models “of devout and charitable activity, not only at home, but also within religious and secular institutions that provided education to young women in need ” In this case, however, it was a representation of a moment of education specifically ethical and spiritual,  since the Brotherhood of St. Anne never carried out any kind of pedagogical activity for girls.