The Meeting of Middle-Aged Religious Continues 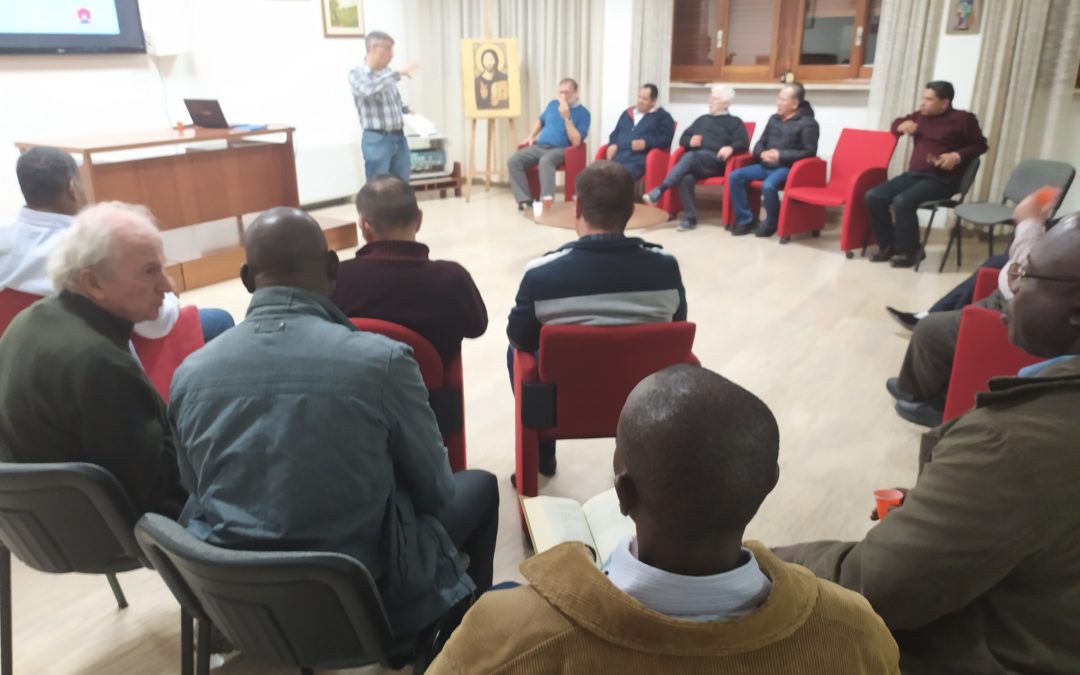 The group of religious between the ages of 45 and 60 is advancing in the development of the lifelong learning program. After deepening for several days in the life and texts of Calasanz, offered by Angel Ayala, during Thursday and Friday, the group has shared and dialogued in four round tables, addressing different perspectives on our life and mission. In the first, a group of young adults shared their experiences under the title “the keys that make me grow and the challenges that I pose”: Javier San Martin (Emmaus Province), Samson Ehemba (Province of West Africa) and Herman Yanto Djabur (Bethany). The afternoon was centered in three young juniors in their initial training process: Daniel Szabó, from the province of Hungary, Louis Yoba Diatta of the province of West Africa and Juliao de Oliveira, from Bethany (Timor Leste, Madrid). The theme was “I want to share with you my dreams”.

On Friday morning, the round table approached our life and mission from the perspective of the laity of the Piarist fraternity with the motto: “Expectations and commitments of the lay Piarists, and what we expect and need from you”; we were joined by Pilar Navarrete, of the Fraternity of Emmaus, Guillermo Gómez, of the Fraternity of Bethany, and Mauro Rodríguez, of Mexico. The afternoon we had the opportunity to share with elder Piarists Fr. Ugo Barani, of the Province of Italy, Fr. José Manuel Jiménez, of Emmaus Province, and Br. Ferrán Sans, of the province of West Africa. The theme was “Contributions to our Piarist life in light of the Piarist experience I have lived”.

On Saturday we were accompanied by His Em. Joao Braz, Cardinal De Aviz, Prefect of the Congregation of the Institutes of Consecrated Life and Societies of Apostolic Life. In the afternoon, celebrating the day of Consecrated Life, the group participated in the celebration of St. Peter in the Vatican, chaired by Pope Francis.

In Rome, the group of participants in the Interculturality meeting is also coming, as well as the group of formators who advance their training plan, so fraternal coexistence and mutual sharing are an added gift to what the program itself offers.