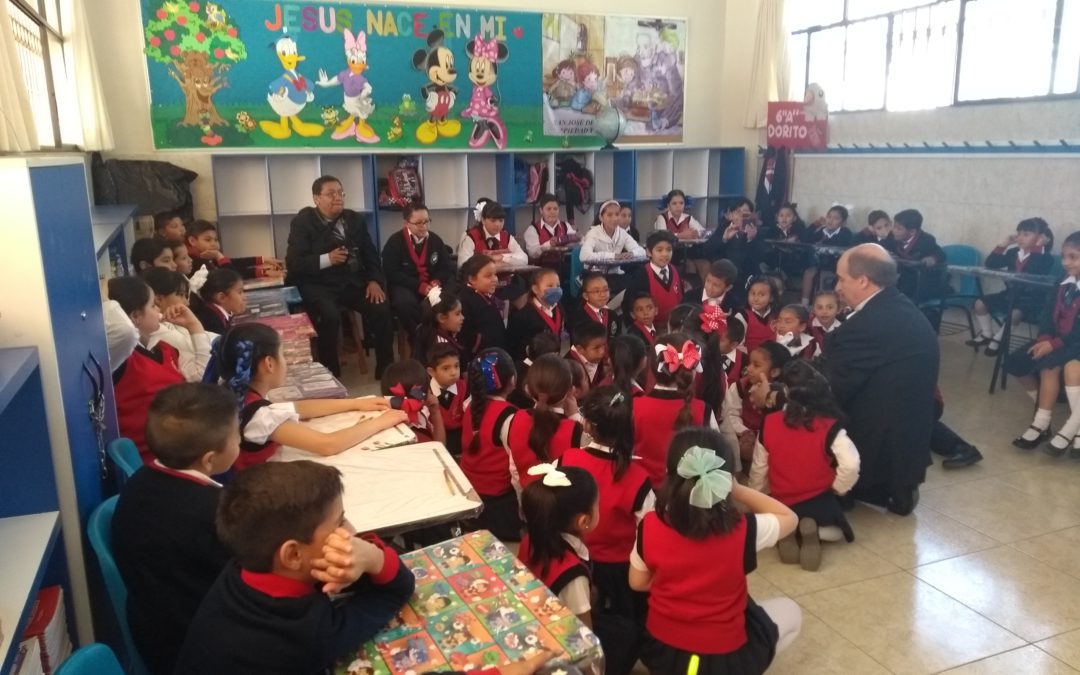 On the occasion of the Canonical Visit of Fr. General Pedro Aguado to the Province of Mexico, on the day of March 11th, he arrived at the Piarist Presence of Celaya, Guanajuato, where the Novitiate is located and the Chapel of Christ the King is attended.

After chatting with each religious, he also held a conversation with the novices, Édgar, Manuel, Isaac, Angel, Alejandro and Antonio. At the end, he shared the prayer with the children who attend the Homework School, where he also spent some moments to meet and greet them.

In the afternoon, in the Chapel of Christ the King, he presided over the Eucharist accompanied by the Priests who are currently in the presence, FF. Guillermo and Otilio, the Assistant General for America, Francisco Anaya, and Fr. Provincial, Marco Antonio Véliz. At the end of the celebration, he approached to greet the group of Acolytes of the Mother of God and the choir of the chapel.

In the evening, he held a community meeting with the six novices, where he stressed the importance of establishing in the formative process of the Novitiate a solid religious basis, to forge a full and faithful future to the Piarist Vocation.

At the end of the day, we thanked God for the meeting and for the valuable sharing with our Father General.

Novice of the Province of Mexico

Continuing his tour of the Province of Mexico, it was now time to receive Father General Pedro Aguado Cuesta, Father Francisco Anaya, Assistant General for America and Father Provincial Marco Antonio Véliz in the Puebla presence on March 08 and 09. With an agenda ready and designed to get to know our reality began their visit.

During it, he had important moments with specific groups of the works that make up the presence: Parish of San Baltazar, with whom he shared the Eucharistic celebration with the faithful; very emotional and meaningful visit with the children and adolescents of the Calasanz Homes with a beautiful sharing with the uncles who are responsible together with the Piarists. At the Carlos Pereyra Institute he met with the managers and pastoralists, who shared their achievements, its walk as an institution, as well as his challenges. During his visit to the Calasanz School he met with the teachers. Finally, Fr. General had an encounter with the shared mission teams of the presence, with whom he lived a beautiful sharing by hearing his experiences and longings as committed Piarist lay people.