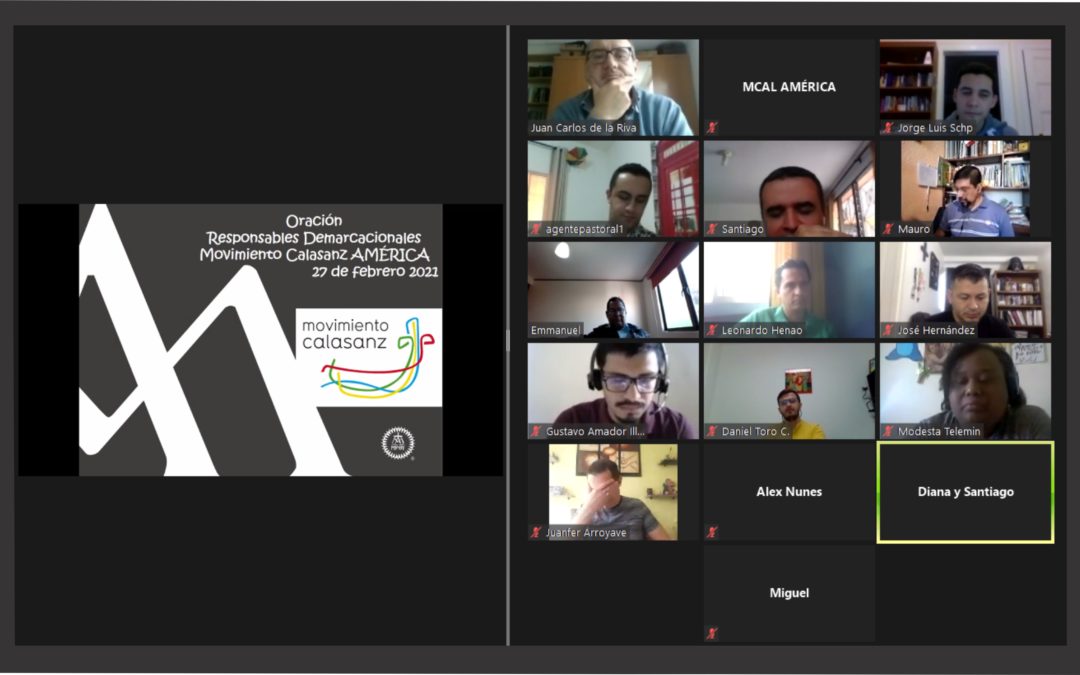 On February 27, the 1st meeting of the year was held with the coordinators of each demarcation of the Calasanz Movement of America.

In an atmosphere of joy, the meeting began with a moment of prayer. The reading of the day illuminated the meeting with the Gospel of Mark 9,2-10. After hearing the gospel, people expressed in sharing that the difference in health and sickness lies in the service of those most in need among those in need. United in prayer, we asked the Virgin Mary to accompany the Piarist mission of each presence in these times of pandemic, to each of the works; educators, children and young people.

The first point of the day was the proposal and formation of a Young Council that will collaborate closely and actively with the RPJ and with the instagram of Movimiento Calasanz. It was agreed that each demarcation would propose two young people, whether lay or religious, to achieve a team that is the protagonist of the digital youth evangelizing process with the task of generating content on social networks. Thanks to Daniel del Toro de Nazaret and Jorge Ramírez Quiles of USA-PR for the proposal and coordination of the work teams.

On the second point addressed at the meeting, juanCar presented the Youth Pastoral Network, which longs to establish a collaborative link with the Calasanz Movement of each presence to strengthen pastoral training processes with an online course, with the formation of a council involving young people in America for youth evangelization and with a directory of agents who contribute thoughtful and formative content to the magazine and social networks. The proposal was received openly and with the desire to work in a network. It should be noted that, there has been previous rapprochement with SEPI, the team of the Calasanz Movement of Nazareth and Mexico. It was agreed that each local coordination will meet in the following days with RPJ to realize its participation, the following guiding questions serve as a starting point: What can and do we want to contribute to the RPJ? Who and what would they contribute? Would other people in the province join? Who?

The third point that was worked on were the advances of the website and the organization of the social networks of the Calasanz Movement. The advances and challenges to form a portal that expresses life were shared with news, resources and materials that serve as a reference and dynamism for the process that each presence lives. It was agreed that each demarcation will delegate a person to form a communication team that reflects and concretes joint communication and information actions.

The fourth point addressed was the presentation of the basic virtual course of the Calasanz Movement. The objective is to offer and energize the training processes of the educators of each presence. The course consists of nine modules, one every three weeks, the 10 booklets offered by the Calasanz Movement for the basic training of educators will be worked on with the participation of 10 educators from each demarcation in America and opened to educators from Europe. Registrations will be made in March and will take place from April to October. We appreciate the coordination of the course by Santiago Gaviria and the Gral. team of the Calasanz Movement, the ICCE of Nazareth for their technical support and development.

The next virtual meeting will be on Saturday, July 03, with the aim of continuing to answer the question: What can we do together to grow in Movement?

Gral. Team of the Calasanz Movement