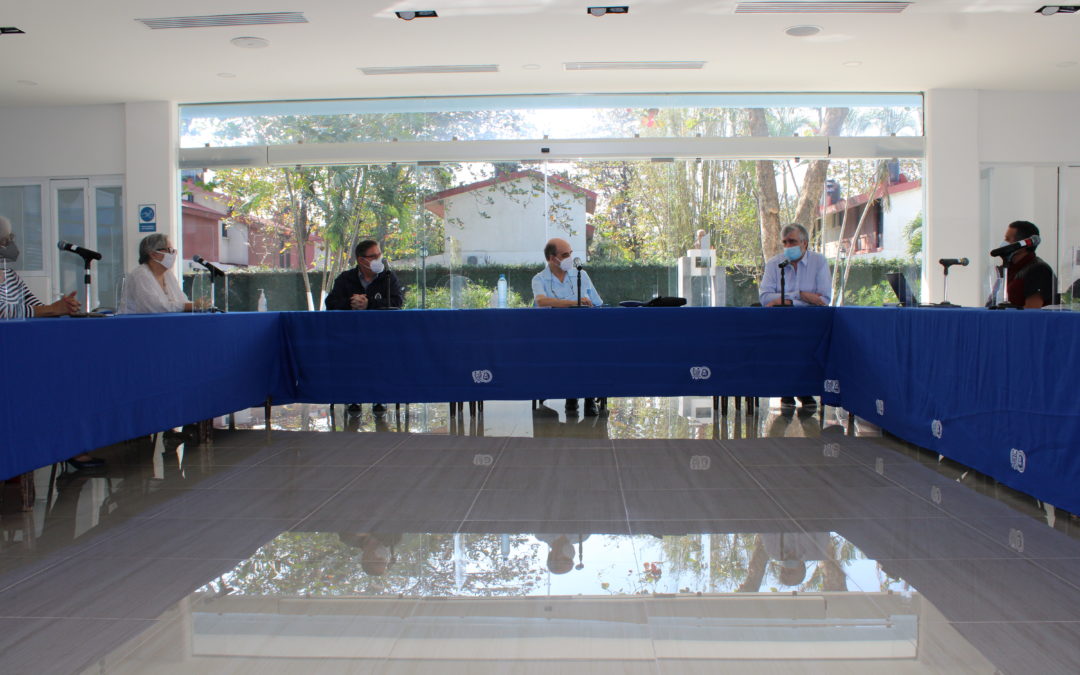 From January 22 to 25, Fr. Pedro Aguado Cuesta, Superior General of the Piarist Fathers, visited the University Cristóbal Colón (City of Veracruz, Mexico). During it, he had the opportunity to meet with teams from different areas of the institution, accompanied by the rector, Dr. and Fr. José Manuel Asún Jordán and the general vice-chancellor, Fr. Sergio Fernando Hernández Avilés.

The first meeting in which Father Aguado received a report on what has been done so far was with the General Academic Directorate and its various Divisions: Exact Sciences, Health Sciences, Law, Humanities and Business and Economics. During it, emphasis was placed on positive results during 2020, despite the pandemic we have suffered. Fr. Aguado recognized and thanked the educational community, that has made it possible to take the appropriate steps to focus efforts on addressing the needs of students in their different circumstances. He also expressed the importance of the shared idea and the conviction of all in the educational model of the UCC; the rooting of this project, including parents, which has enabled the remote presenced scheme.

At the following meeting, with the dependent areas of the General Vice-Rectorate: Directorate of Information Technologies, Directorate of Resources and Logistics, Human Resources Departments, Accounting and Treasury, a report was shared on what has been done about the functionality during this contingency of the various processes emanating from these areas, such as: costs of the services offered, maintenance of facilities, health filters, disinfection, accounting and audit processes in order, software licenses, technological support for academic and administrative activities, as well as work environment. Fr. Aguado mentioned that without its efforts the development of academic life as it has been done so far would not have been possible.

The Calasanz UCC Movement youth group in turn shared the concerns, needs and learnings from the context we are experiencing. Likewise, the importance of accompaniment in young people and the challenges of the Pastoral Center at Christóbal Colón University in this regard was addressed. Father General noted the need to grow, move forward, and evolve, and how there were no people who have not grown up in this pandemic. He identified a constant in all the people with which he has been able to interact, and it is that they have grown up, met themselves, looked for other ways to communicate and developed other qualities, other ways of growing, of studying. Young people have been able to be creative and he is confident that the current generation will continue to be innovative.

Subsequently, in meeting with members of the Galilea community of the Fraternity of Mexico, he discussed the areas of community life, prayer and service to the children of the Calasanz Social Center. He recognized the work of the community to convene other educational actors who have lived the Calasanctian spirituality in the works and form with them new communities that foster identity and the path to fraternity. He thus stated that it is a good strategy to give name and space to those who have been collaborators in our works. He showed his enthusiasm for the developed path and invited us to continue to strengthen the Piarist Charism and Spirituality, mainly among the poorest, because that is the place where the Pious Schools are born, live and update.

The Presence team also presented its activity report. The action plan was presented with five axes to be promoted: Piarist subject, participation, identity and educational quality, pastoral action and social action. For each of them, in turn, a commission was generated with representatives of each of the works to advance the assigned objectives and goals. Father General welcomed this organization by mentioning that it responds very well to the complexity of the Piarist footprint in Veracruz. Similarly, he encouraged the search for religious and lay vocations to Piarist life and to continue to advance the developed plan.

In meeting with the director of the Calasanz Social Center to learn about what has been done in these times of pandemic and decrease of face-to-face activities of non-formal education, three programs were discussed. The “Digital School”, with the support of volunteers from Cristóbal Colón University and other schools, which has been able to reinforce the educational learnings and lags of children and adolescents in this time and will be useful for the return to the new normality. The program “Tareas S.O.S”, in which volunteers coordinated by the Social Center solve school doubts in a period of 24 hours maximum; and psychological and spiritual assistance via telephone to address situations of families in the community. Father Aguado stated that these ways of intervening may eventually shed light on other Piarist works of non-formal education that have been decimated by the contingency.