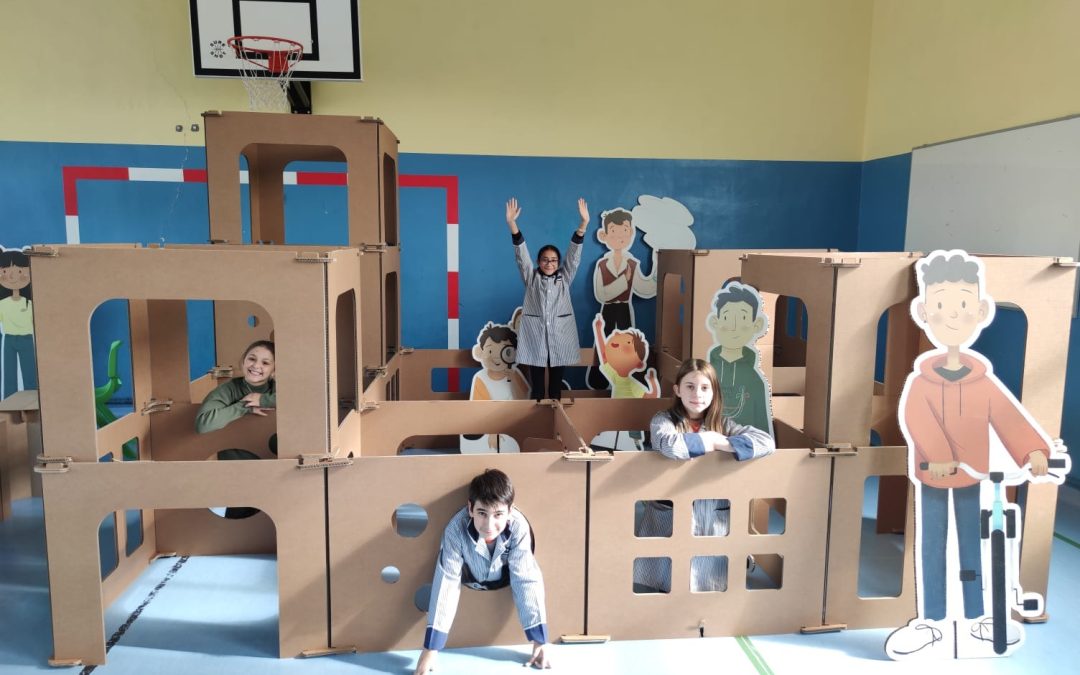 On the occasion of the 325 years of the arrival of the Piarists to Peralta de la Sal, hometown of Saint Joseph Calasanz, we offer this didactic resource to the entire educational community: an interactive exhibition made of cardboard on the figure of Calasanz and his continued work in the Piarists.

The Emmaus Communication Team has implemented an old project to create an interactive exhibition on Calasanz. It premiered in Peralta de la Sal in September of this year, on the occasion of the 325 years of the Piarists in Peralta, and this assembly, entirely built in cardboard, has already begun its journey from school to school so that our students from all over the province can enjoy learning.

To show visitors, children, young people and adults, the life of Calasanz and its continuity in the Piarists of today.  Theme: education. The passion for educating. To link it to the 325 years of Peralta and start it in the cloister of Peralta, but possibility of mounting it in each school for a while, on a rotating basis.

It has a vocational component. Through different activities, participants can ask questions and value more the Piarist vocation that begins in Calasanz and continues today.

They are cardboard modules, which invite you to read and see information, and also to carry out recreational activities, some of which must be directed by a facilitator, and others are for autonomous use.

The different elements are as follows:

EIGHT INFORMATIVE TOTEMS of the life of Calasanz, highlighting the stage in Spain and the birth of the Pious Schools in Rome, and its continuity in the Order of the Piarists, Emmaus and the world.

ASSEMBLY or meeting area, which is at the same time a game of forming words. It can also be used as a video projection area, especially the “Draw my life “,The treasure of education and the song  “José de los pequeños” (Joseph of the little ones).

DECORATIVE WALL: it is at the same time a puzzle and a photocall with the image of the Exhibition.

LIBRARY with books and stories of Calasanz for a while of reading. Also paintings, manipulative games, etc …

ROCKET The great invention of the school. Space to think about one’s own future, where I want my school rocket to take me…

OLIVE: we want to fight against evil in the world. We hang our wishes for a better world on cardboard silhouettes shaped like boys and girls.

THE SCHOOL OF CALASANZ. Multiactivity labyrinth, with five mini spaces for one or two children, with different activities to do (painting, listening, writing …)

TABLES AND CHAIRS WITH TABLETS OR LAPTOPS. in which to do recreational activities through computer applications.

A pedagogical proposal has also been prepared to make the experience enriching as well as fun.

They will know the life of our saint, but not only as a historical curiosity but to ask us questions about ourselves and our experience in a school or work of the Piarists, and also about our personal future.

Education for all is a great dream that Calasanz began to build, but that today is still in us.

Saint Joseph, the Piarists, the children and us, we can also build a better world, the Kingdom of God, through education.   You are also Piarist!! And you can build a more beautiful world for everyone.

Through videos, gymkanas, challenges, photographs, personal reflections, moments of dialogue, etc., children and young people will be able to deepen the life of this saint and the joy of participating in the present of his educational dream for the world.

We remind you that there have also been other resources that are at the service of the entire Order and that you can find on the internet or by requesting them to juancarlosdelariva@escolapiosemaus.org

The video of Calasanz’ biography told as Draw my life:

The Ruah group’s song “Joseph of the Little Ones”:

A deck of cards with very Piarist characters.