Memory and Prophecy. A story to remember, a story to be built 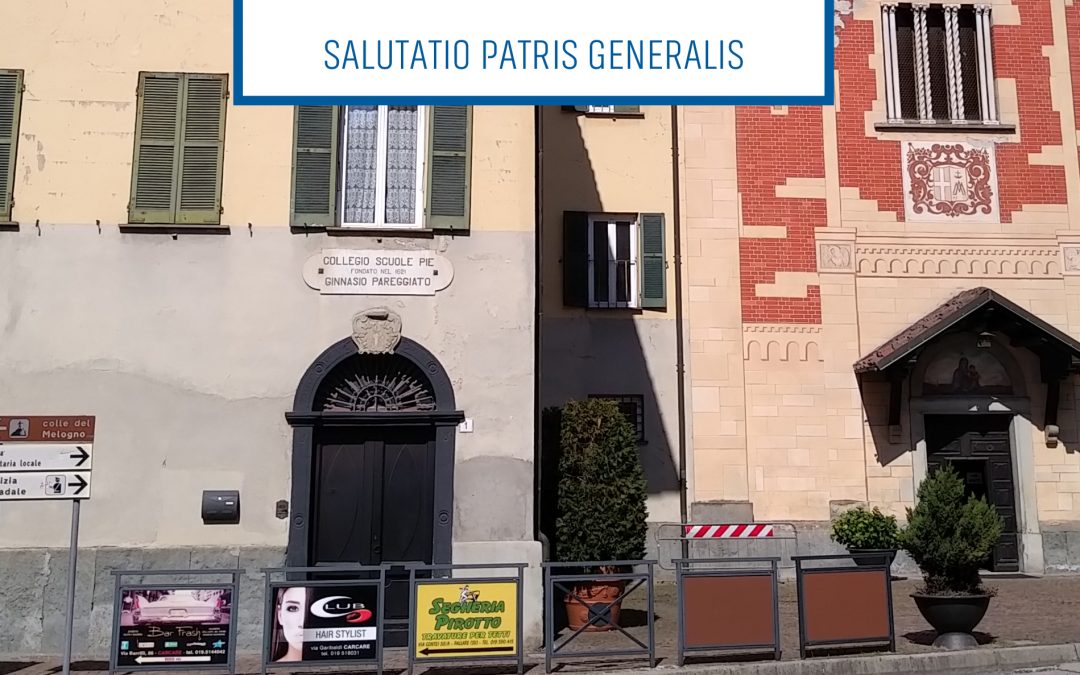 Memory and Prophecy are two complementary dimensions of the entire historical experience of Consecrated Life in the Church. It is likely that only if we combine them well can we extract from both the deep wealth that they contain. We look at our history to strengthen the keys from which to build the future, not to stay in the nostalgia of what has already happened. And we build the future from what we have learned and received from our elders, as “dwarves on the shoulders of giants”  who can see beyond themselves because they have the support of those who lived before them.

I would like to reflect in this fraternal letter on the life of the first Province of the Order, the Pious Schools of Italy, inspired by two family “events” that we are living in these months. The first, the farewell of two extraordinary elders, Fathers Olivo  Pallanch  and Giovanni Grimaldi, both recently deceased at the age of 95. Two Piarists worth remembering: cheerful, dedicated to mission, passionate about the Pious Schools, apostles, educators. How much I learned from them by listening to their stories and their projects! Because yes, at their age they had projects.

The second, the celebration of the 400th anniversary of our school of Carcare, founded by Saint Joseph Calasanz in 1621. Carcare is today the third oldest house of the Order, of which that remain open, after the Mother House (San Pantaleo) and Frascati. It is the first Piarist foundation outside the Roman context. We would not arrive in Naples until 1627, in Florence until 1630 and outside the Italian borders until 1631 (Nikolsburg).

When one arrives in Carcare one immediately sees the sign announcing to everyone that Carcare is a “città calasanziana”. With seeing that poster we can already get an idea of what the presence of the Piarists has meant for the city. The story of the founding of Carcare is worthy of being known by all, because we can learn a lot from it. Not in vain are we talking about a school especially loved by Calasanz, who wrote a weekly letter to accompany the process, even going so far as to design the plans of the building. These are very specific letters in which you can see that he cared about everything. Especially nice is to be able to read how he was interested in the novices who were in the community, whom he invited to Rome for the Holy Year of 1625, to “learn to be saints”.

When we contemplate our history, we realize the extraordinary effort made by our elders to gradually build the Pious Schools. We realize the dynamisms that made it possible for Italy to have more than a thousand religious in seven provinces at the end of the eighteenth century. We become aware of the difficult external events that seriously damaged the Order in various historical times, and also of the mistakes made by ourselves, almost all of which can be synthesized into three: conformism in the face of difficulties, lack of fraternal communion and a lack of vision of the future.

We are beginning the fifth century of history of the Pious Schools in Italy. Today we have an Italian Province, with 60 religious, of which 10 are not Italians. The Province runs six schools, seven parishes, fifteen churches or chapels and four non-formal education programmes. Hanging over it is a formidable question, as disturbing as it is hopeful and convening: What is the future of the Order in Italy?

I have written “salutatios” about Congo, Vietnam or Indonesia, recent foundations of the Order, seeking to offer the keys from which we have started in each country and the options from which we intend to walk. I think it is also good to write about an ancient Province, looking for the same thing: how can we continue to build Pious Schools in Italy? I share with you all   my small thoughts, which spring from a deep conviction:  if the Order is not possible today in secularised Western Europe, it will not be possible tomorrow in other contexts that seem to be flourishing today. The Piarist Consecrated Life does not depend only on the more or less favorable contexts, but on the capacity we have to interpret them and respond to them from a charism that is still necessary and urgent.

I propose five options that I believe we must consider clearly in order to try to make this fifth century of the Order in Italy – finally – flourishing and missionary. And, as a portico, I propose to review this extraordinary paragraph of Pope Francis that tells us how we should pose a challenge like the one before us: to make the Order possible in Italy. “Time is superior to space. This principle makes it possible to work in the long term, without obsessing over immediate results. It helps to endure with patience difficult and adverse situations, or the changes of plans imposed by the dynamism of reality. It is an invitation to assume the tension between fullness and limit, giving priority to time. To give priority to time is to take care of initiating processes rather than owning spaces. Time rules the spaces, illuminates them and transforms them into links in a chain in constant growth, with no paths of return. It is about privileging actions that generate new dynamisms and involve other people and groups that will develop them, until they bear fruit in important historical events. No anxiety, but clear and tenacious convictions.”  [1]

Live and work with mentality of “Province construction“. It is a new mentality, which we need to recover. It is that of Calasanz, who in addition to giving his life for the mission, built the Order, thus leaving us a permanent message: building the Order is nuclear in our mission, it is something deeply missionary.  This mentality involves many things, but I would like to highlight just four:

Create new “life centers”. The Province will walk if it is able to create new “centers of life”. And this is done from two options: renewing some presences to turn them into places that radiate life (for example, a renovated  Pompilian sanctuary or an authentically Piarist parish) or assuming new presences and missions, well discerned and planned. We cannot and must not wear ourselves out just in “holding things up”, sometimes in an expensive and even decadent way; that path leads nowhere. We must think seriously about this challenge and try to take steps in this direction.

To promote in a systemic way the options of the Order. The Order has nine “life keys” from which it tries to carry forward its path. The nine are important, the nine can and must be developed in a coordinated manner. Any step, however small, in the right direction is a “life bet”. For example, a plan for the formation of the laity in Piarist identity or a community that decides to reorganize its life to make it more meaningful. Similarly, any step in the opposite direction delays or moves away renewal. For example, not working with the laity on their Piarist identity or not promoting the Calasanz Movement.

Grow in missionary zeal. The history of Italy is missionary. From Italy, Calasanz sent the first missionaries to Nikolsburg. Every year, the Order celebrates the “Day of the Piarist Missions” on April 2, remembering the first missionary sending made by Calasanz in the year 1631 in the  persons of eight religious who began our mission in the land of Moravia, today in the Czech Republic.

Perhaps more than one will find it surprising that I invite a Province like the Italian one to strengthen its missionary spirit, considering its numbers and its average age. But I have no hesitation in doing so, inspired by the strong call of Pope Francis in Evangelii  Gaudium: “We are all called to this new missionary departure“.[3] I do so for three fundamental reasons:

The Province of Italy (then the Province of Liguria) founded in 1994 the House of Daloa in the Ivory Coast. Today, the Order rejoices in the Piarist life of 32 Ivorian religious.  God blesses -always- apostolic courage.

One of the best gifts I have received these years in which I have served the Order as Father General is that I have learned to love each Province in its reality and in its challenges. And I have received from each many gifts. I would like to highlight some of the many I have received from Italy: the love of school (which still remains despite the difficulties and some carelessness); the example of the life of so many elderly people who are still active despite their age; the ability to arouse love for Calasanz, perhaps not sufficiently exploited, as well as a beautiful experience of the Calasanctian Family.

Let us pray for the Italian Province, in thanksgiving for so many gifts offered to the Order, and especially to children and young people, throughout its long and fruitful Piarist history.

[2] Constitutions of the Order of the Pious Schools number 6