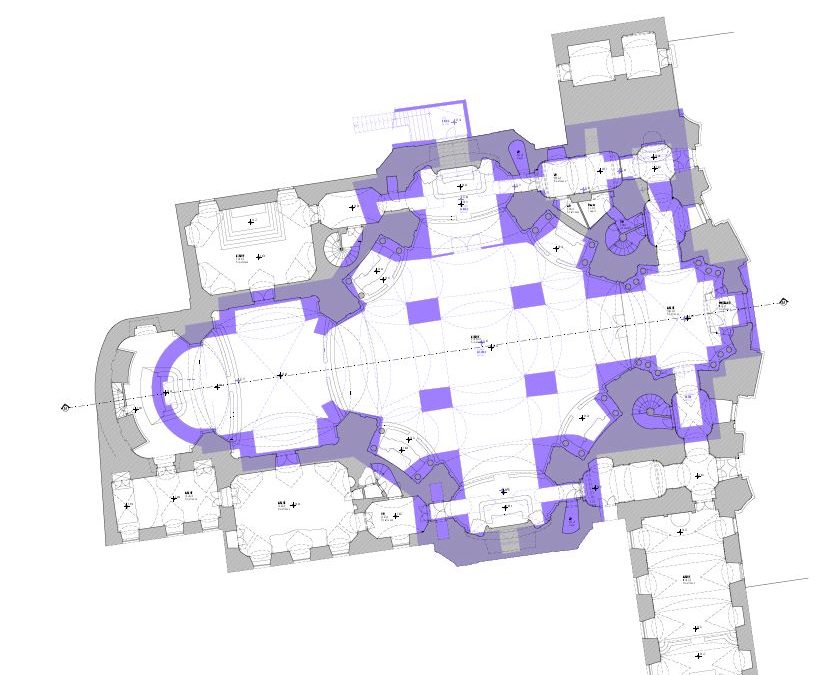 At the end of 2020, the Piarist Church of Maria Treu was fundamentally resurveyed. The plans produced serve as an essential basis for future work on and in the church. In a conversation with the administrator of the Piarist Order Province of Austria, Mr. Thomas Pawel, the importance of such surveying work becomes apparent.

The Piarist parish was surveyed, and new plans were made. What is the aim of the latest projects?

Thomas Pawel: We aim to give the electrician a professional basis to enter the electrical wiring into a plan for later generations in a way that is easy to understand. These plans are also a good basis for planning events in the church, such as masses, weddings, and concerts.

From today’s perspective, it is almost inconceivable that we have not had a professional plan with exact measurements for so long. Until now, we only had a very simplified floor plan that was hand-drawn many years ago. The advantage of the new plan is that it is available in digital form, and therefore it is possible to edit the plan and the measurements digitally.

Who had the idea to remeasure the church?

In the regular construction meetings, the question arose: where should the electrician enter the routing of the new cabling and fuse boxes? It quickly became clear to everyone involved that this could only be done with a digital basis plan. The master-builder Martin Sieger from the Archdiocese of Vienna put us in touch with a surveying office.

What technology was used?

2D plans of the church were made with the help of 3D laser scanning. The surveying was non-destructive. These plans show the most important room geometries, simplified wall openings (doors, windows), and surface areas in a simple representation. Other non-structural fixtures are shown in simplified form. The same applies to staircases. Height notes are used so that a height reference of the rooms to each other can be read off, but no room heights are specified.