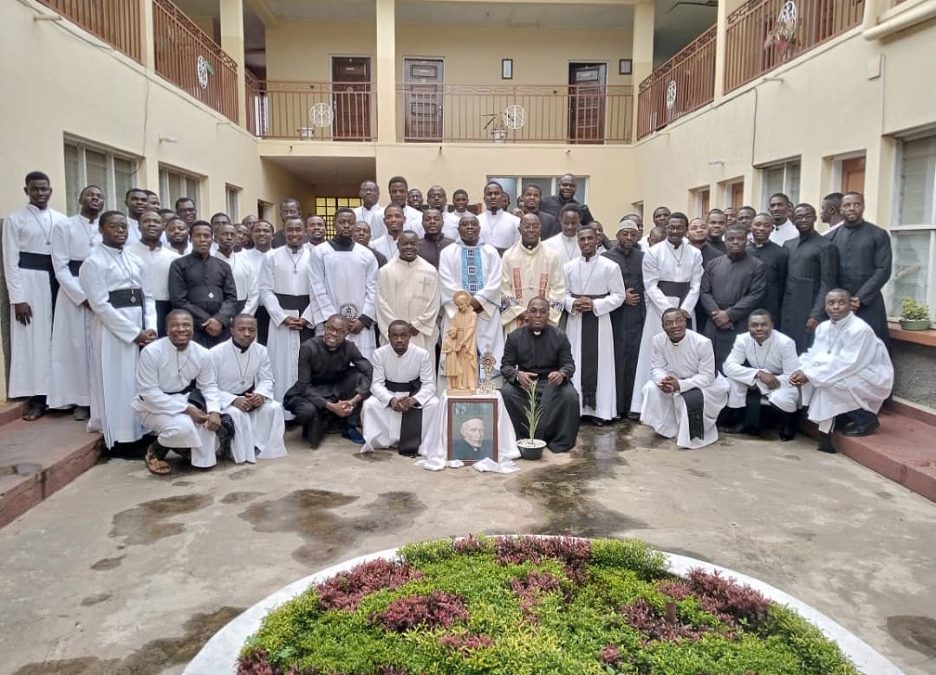 The Assembly of Juniors

The annual assembly of juniors which started on Thursday 18th  to Sunday 21st August brought over 66 piarist Juniors of the Province of Central Africa to Our Lady of Africa Formation house Futru Bamenda and had as coordinators the Provincial Superior (Rev. Father Evaristus Akem Ndi Sch. P.) with Masters of Juniors for Bamenda (Rev. Father Elias Sengka Sch. P.) and Yaounde (Rev. Father Paulinus Abose Sch. P.). Top on the agenda were a welcome address presented by the rector of the community, practical modalities of the assembly, then the nomination of some juniors to lead the assembly. Fraternal exchanges and sharing characterized the first day. Basing on the theme “Our centrality on Christ and ‘the Piarist we need’, the assembly of juniors had three major conferences which were; ‘Religious life and the Centrality of Jesus’ by a Jesuit professor Father Kisito Forbi, “the Piarist we need” by Father Paulinus ABOSE Sch. P, and  Father Peter Afoukeze Sch. P., and lastly, the last conference was a fraternal exchange with the Father Provincial on the overview of the last General Chapter, the life of the Province of Central Africa in particular and the Order of the Pious Schools in General. Through spirit filled fraternal encounters among brothers, sporting and recreational activities, daily Eucharistic celebrations and workshops, the juniors deeping their love for God, their neighbors and the little ones through the footsteps of Calasanz. Speaking at the end of the assembly of juniors, Father Provincial thanked God for the gift of so many Piarist Vocations in the province of Central Africa and thank the formators for the work well done.

The 6-days annual retreat of juniors which started on Sunday 20th August and ended on Friday 26th August 26, 2022, was centered on the theme “the will of God, here and now’”, it took place in the formation house in Futru Bamenda with Rev. Father Andrew Solii SD as the retreat facilitator. Using biblical and experiential epistemologies, daily adoration and Holy Masses, conferences and spiritual accompaniments;  the systematic theologian exhorted the juniors to be obedient to the will of God, patience in moments of trials, love the truth and grow in love of God and neighbor following the footsteps of saint Joseph Calasanz. This was done through a series of conferences on topics like; the mercy of God, the power of prayer, the Lord’s prayer, the power of forgiveness, the Holy Mass as the Source and Summit of Religious Life, the will of God in the footsteps of Mary and the mercy of God in the sacrament of confession.  At the end of the retreat, the representative of the juniors (Br. Savior Azeh Sch. P.) and the provincial superior both thanked the province of Central Africa for this moment of grace through the retreat facilitator, Father Andrew Solii SD.

Celebration of the feast of Saint Joseph Calasanz

Providentially, the solemnity of Saint Joseph Calasanz was celebrated within the period of retreat with a solemn vespers on the 24th August and a solemn Eucharistic celebration on the 25th August. The spirit filled retreat ended on Friday, August 26, 2022 with sacramental confession and fraternal banquet celebrating the feast of Saint Joseph Calasanz in the presence of the provincial superior, Rev. Father Evaristus Akem Ndi Sch. P. the celebration was marked by speeches, musical presentations, feasting, comedy and fraternal sharing.

Next was the canonical renewal of religious vows on Saturday 27th August of all the juniors present for the annual assembly. This took place during a Eucharistic celebration presided by the provincial superior, Rev. Father Evaristus Akem Ndi Sch. P. and concelebrated by the retreat preacher and the Assistant Provincial in charge of initial formation. During the homily preached by the retreat facilitator, the juniors were exhorted to surrender their weaknesses and brokenness of their vocation to God who has lovingly called them to be formed.  In accordance to the constitutions of the Order of the Pious Schools, the simple professed religious present for the assembly of juniors joyfully renewed the vows of poverty, chastity and obedience and in accordance to the vow of obedience, education of the children and  the youth in piety and letters.

At the end of the Solemn Eucharistic Celebration, Father Provincial thanked the Formators of the province for the great formative job well done. In the various formation houses and exhorted the juniors to grow in fraternal life and prayer.   Before the final blessings, Fr. Paulinus Abose Sch. P. immensely thanked all the juniors for the renewal of their vows and rendered words of gratitude to the retreat facilitator Rev. Father Andrew Solii SD.  The Mass ended with a collection of pictures and a moment of fraternal sharing.