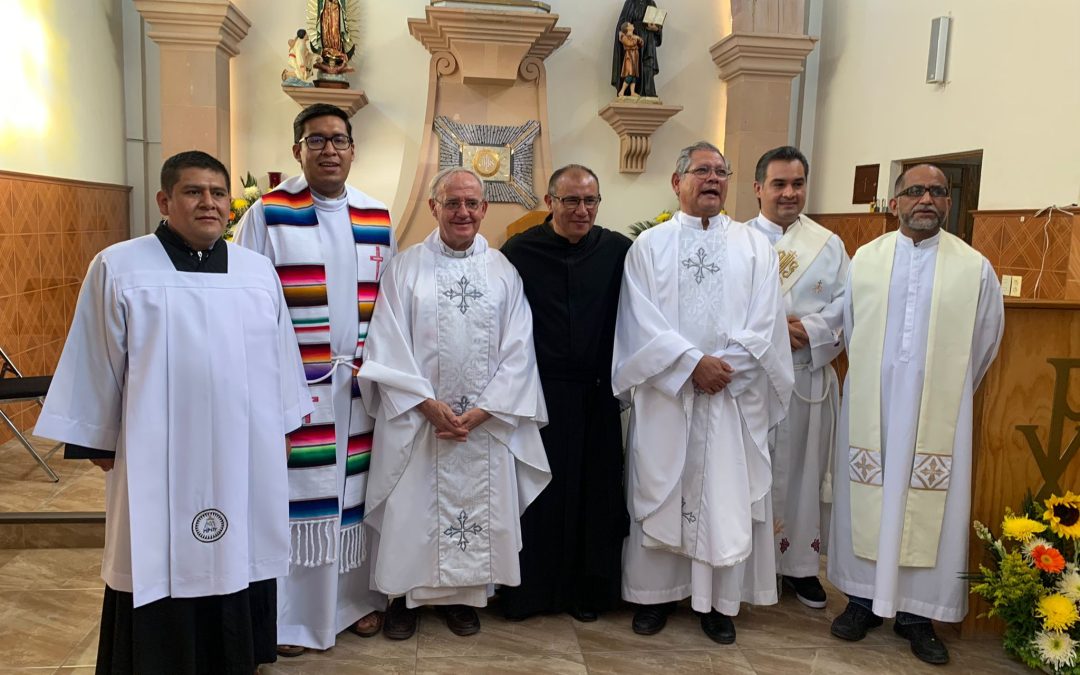 Once again, the USA-PR Province was clothed with the joy of the Lord in the Solemn Profession of our brother José Juan Reséndiz Sch. P., who at 47 years of age said yes to the Lord totally and forever, in the Chapel of Christ the King, Celaya, Mexico, very close to the novitiate house of the Piarist Province of Mexico.

Brother José Juan knew the Order of the Pious Schools when, several years ago, while trying to pursue the “American dream,” he met with Fr. Alberto Moreno Sch. P. Then, he realized that God had a “different dream”: to give his whole life to Him, being a Piarist forever, at the service of children and young people.

Mexican by origin, born in the state of Guanajuato, Brother José Juan, has followed almost the entire itinerary of initial formation in the Province of Mexico. He is now waiting for his immigration process to be solved so that he can return to the USA since he is incardinated in the USA-PR Province.

The celebration of solemn vows took place in a familiar, simple, and deep atmosphere, surrounded by members of his beloved family, friends, and Piarists who joined the joy of his dedication. We underline the presence of Fr. Marco Antonio Véliz Sch. P., Provincial Superior of Mexico, the incoming novices, and the novices who are about to take their vows on July 16, as well as all the members of the novitiate community and others. Fr. Fernando Negro, Provincial Superior of the USA-PR Province, received his vows amidst deep emotion as José Juan shed tears of joy and happiness.

During the homily Fr. Fernando highlighted the fact that religious life can only be understood from the experience of someone who has encountered the Lord, who lives within, in his heart, and who, in every moment and circumstance, calls him to something even greater and more beautiful. The religious vocation is not the fruit of personal merit but of the grace discovered as a gift of the One who has “rescued” us with his love and counts on our friendship and availability.

In the brief words that Brother José Juan addressed to the assembly after communion, he made special mention of his beloved parents, already deceased, but who were there present because, especially his mother, Carmen, was a happy woman to see that her son, José Juan, was also happy being a Piarist. I’m sure that from heaven, she will always be with you, dear José Juan.

I end this brief reflection by adding that on July 15, Feast of St. Pompilio Maria Pirrotti, Brother José Juan Reséndiz, will be ordained deacon by the Bishop of Celaya, Monsignor Víctor Alejandro Aguilar Ledesma. Thus, in these few days, we are reaping the harvest of the grace that began its work in our brother.

José Guadalupe García Jasso Sch. P., also Mexican and a member of the USA-PR Province will be ordained a priest on July 17. But, in the State of Guanajuato.

May these celebrations help us to renew our Christian commitments according to the vocation received from the Father, in the footsteps of our Holy Founder, dreamer of a new world for children and youth through the evangelization-education that they need today and always.