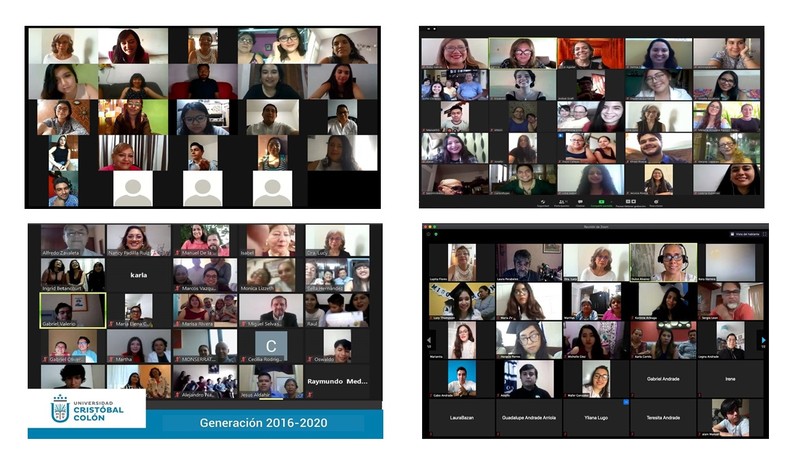 Farewell events are being held between June and July for students who have graduated from this house of study. The meetings have been characterized by their warmth and spontaneity, involving students, their families, teachers, and managers.

The meetings were held from the houses, using the Zoom platform. It was attended by specific guests and  there were  emotional moments of the students  and  their parents  when  they took the floor to share their experiences and feel at this stage that because of the health contingency, they had to live it in an unexpected way. A video with compilation of their university stages as students in the classroom, in coexistences and trips of study was also presented for each generation as a surprise gift.

Among the outstanding messages from the authorities we mention the following:

The director of the Humanities Division, Dr. Lucía Victoria Valencia Virgen, welcomed on behalf of the rector of the UCC, Dr. and Fr. José Manuel Asún Jordán, referring to this significant achievement of the students and their families, as well as the joy it means for the institution that more generations complete their studies.

Dr. Juan Andrés Tovar Morales, a professor of the bachelor’s degree in Doctor Surgeon, reminded the alumni of their attributes and values that have made them arrive where they are and as always they must have them very much in mind to continue walking in this profession that will never cease to amaze them. For his part, the MPSS Luis David Valdés Molina, first place of his generation in this same degree, made his companions feel how proud he is of them for having managed to overcome obstacles and never stop growing.

Master Arturo Barragán Hermida, head of the Academic Architecture Area, recalled the first day of classes in which students began their career from the dream of being architects; dream fulfilled with the accompaniment of teachers and their training to develop from now on with the new job opportunities demanded by the current professional contexts.

Among the special guests, Lic. Jordy Herrera, an economist, who was CEO of Pemex Gas, and Basic Petrochemistry and Energy Secretary in 2011, told them some anecdotes about their university life and the responsibility they have in being economists, because he said that, if you are a doctor, a person’s life is in your hands, but if you are an economist, in your hands is the life of an entire society, recalling the impact that policies have on the distribution of income and poverty.

As a special detail was made a symbolic last pass of list.

The degrees belonging to the Academic Divisions of Humanities, Law, Health Sciences, Exactas Sciences and the UCC Business School participated in these events.

Director of Institutional Communication and Image