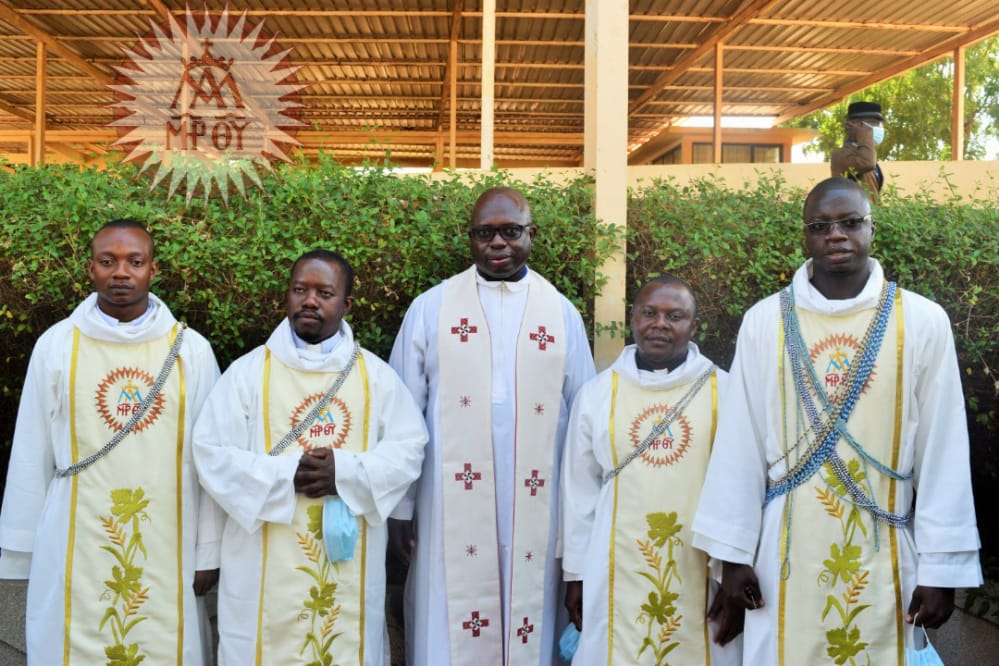 Our Piarist brothers Dorgelais ZINGBE of St. John the Baptist, Paul NIKIEMA of the Glorious Cross, Guy GANGNON of Divine Mercy and Jacques Benoit Michael MANGA of the Mother of Jesus, were identified with Christ the Servant and became with Him the sacrament of the presence of God among the children, by the laying on of the hands of His Excellency Mgr Benjamin Ndiaye, Archbishop of Dakar, Saturday, January 2, 2021, at 10 a.m., at the Marian Shrine of Popenguine. It was also an opportunity for him to ordain eight priests, including one on behalf of the Congregation of the Marist Fathers.

It was for the second time, during this pastoral year, strongly marked by the Covid-19, to have diaconal and priestly ordinations in this Marian Shrine. “The Virgin Mary has summoned us again,” the Archbishop said at the beginning of his homily. Along the way, he recalled the central place of the Virgin Mary in the Order of The Pious Schools and in the Congregation of the Marist Fathers.

The epidemic context and health systems have had an impact on liturgical celebrations and the organization of such an event. A communiqué from the Archdiocese, issued on 30 December 2020, set out the precautionary measures, including restricting the number of participants in the ordination mass (25 members/ family of ordained) and referring the First Masses to a more favorable period.

The respective families, the priests, religious and sisters, all left in joy, praying to God for a new year rich in divine blessings under the assistance of the Holy Spirit.