Province of Argentina. Icon of Blessed Joan Roig i Diggle 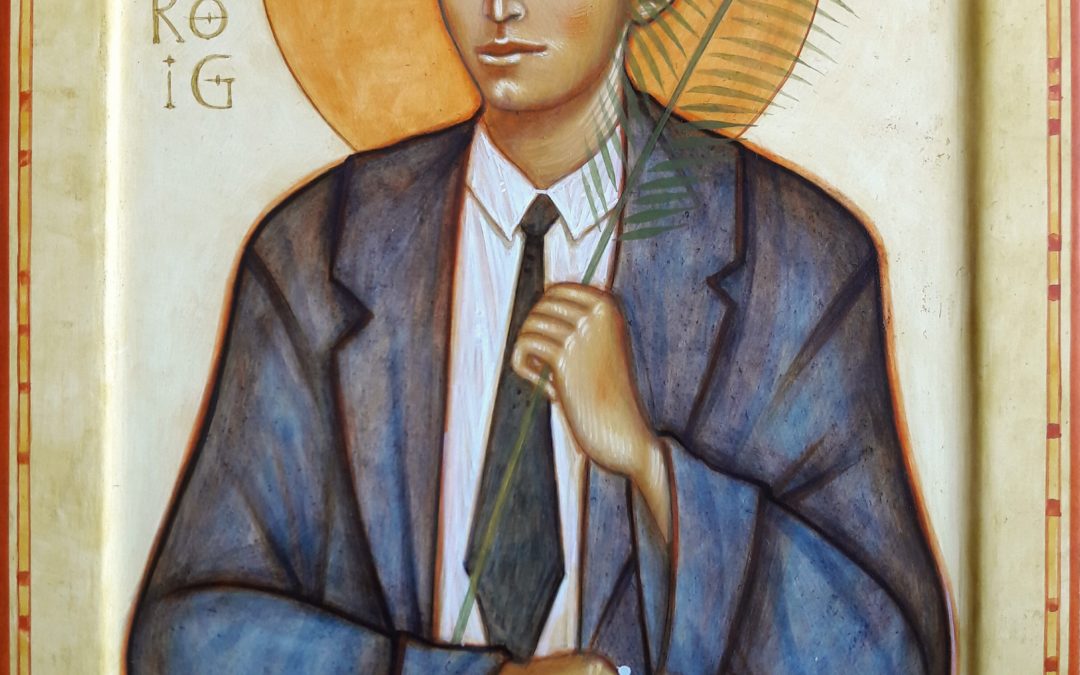 The artist Emmanuel Cusnaider, at the request of Fr. Marcelo Benítez Sch. P., wrote the following lines about the icon he painted of Blessed Joan Roig i Diggle:

I will start with a brief description of the icon technique: it is painted with tempering paint, natural pigments with egg, on cedar wood prepared with levka (powder chalk, gelatin, etc.), which is the most suitable base for tempering paint.

After studying a little about the life of the Blessed One and beginning the path of prayer proper to iconography, which consists in entering into friendly and fraternal dialogue with the saint that we will represent, thus the composition of the icon was born.

I was moved by Joan’s courageous commitment to the parish where he developed his life of faith with his brothers. His perseverance in evangelization in difficult times. This is possible just for love.

I see it as a good model for Christian youth. And reaching the example of his master, to give his life forgiving his executioners shows us the way, which is nothing but to be other Christs on earth, loving and serving all those around us.

The orange aureole fire symbolizes the surrendered life, its martyrdom, its holiness of life.

In his left hand he carries the palm of martyrdom as it appears in the Revelation when Patmos’ seer asks about who are this crowd dressed in white with palms on his hands and receives the answer: “These are those who come from the great tribulation, those who have washed and bleached their garments in the blood of the lamb” who loudly shouted “salvation comes from the Lord and from the lamb.” In this way we can say that with his martyrdom Joan joined that multitude of men and women who have shed their lives for Christ and whose blood, poured out of love, cries out to Heaven to descend God’s mercy for all human beings.

In his right hand he holds a rosary sign of his devotion to Mary. I missed the sign of his Eucharistic devotion but I did not wanted to reload the icon with too many elements.

The fact that he appears in a suit is very significant, but nothing forced since he was a layman and appears in the costumed photos, which was the usual dress of his time and also a sign of the understanding that the Holy Spirit gives to the Church about holiness.

Joan Roig’s figure on the icon appears almost head-on but has a slight tilt to the right and his face is semi-profile. This indicates a double movement. It is turned to God and also turned to us as an expression of the Church’s own liturgy. He looks at us and enters into communion with us and at the same time he turns to Heaven, to Christ, inviting us to enter into communion with Christ. He, as a member of the triumphant church, invites us, a pilgrim church, to live our daily lives in the presence of God.

Blessed be God in all his saints.