The Piarists present the complete works of Saint Joseph Calasanz 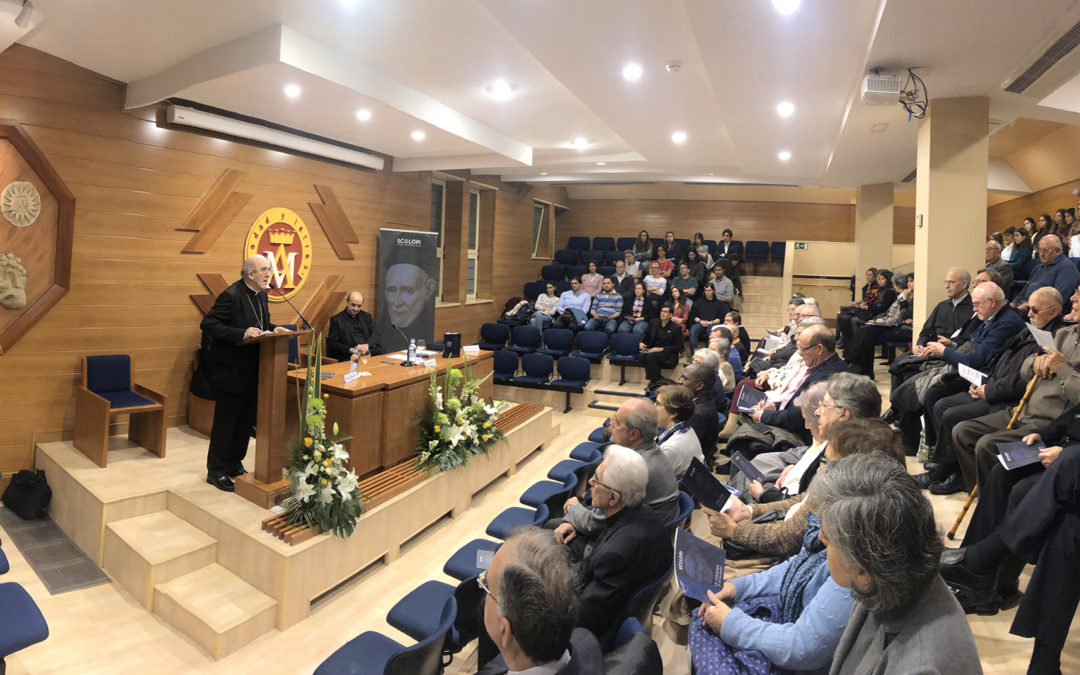 The Congregation of the Pious Schools has presented at two events in Madrid and Rome the Opera Omnia of Saint Josephy Calasanz.

Rome, December 9, 2019. The work is the compilation of all the writings of the Saint, about 10,000, elaborated from 1587 to 1648. The presentation of Madrid, which took place at the Calasancio School on November 27, the feast of his patronage, was presided over by Cardinal Osoro and was attended by the Marianist Javier Cortés and the Bishop Emeritus of San Sebastián Juan María Uriarte. The presentation in Rome, which took place last December 3rd at the General House of the Piarists, was attended by Cardinal Rodríguez Maradiaga, as well as Professor Mario Spinelli, doctor of history and biographer of Calasanz.

As Fr. General Pedro Aguado points out, “the Opera Omnia is a desire long dreamed of by the Piarists and a very felt need in the whole of the Pious Schools and in the educational world”. In fact, it is the result of more than three years of intense work coordinated by the historian of the Order, the Piarist José Pascual Burgués and Ricardo Cerverón, professor at the Catholic University of Valencia. Fr. General stressed in both interventions the importance of this publication, “for it is an opportunity to present Calasanz, to the Church and to society, as it really is: the father of popular education, the promoter of education for all, and one of the leading figures in the history of the long struggle for the right to education.”  The Opera Omnia contains more than 5,000 writings of the Founder in ten volumes; the first eight collect his handwritten letters, while the other two are composed of different writings of a legislative, administrative or spiritual nature.

As Pedro Aguado states, “Our schools and our society are very chalenged today. Reading and getting to know Calasanz, we find in it safe clues for the path we have to travel.” Among others, the centrality of the child and his development, because “in a world like ours, it is essential to remember who is at the center of all our educational work”, or the example of Calasanz in the defense of the child and his care, in all its dimensions. “His struggle for a dignified treatment of every child and his fight in defense of what we now call ‘protection of the child’ are extraordinary,” Aguado says. He also encouraged schools with a soul, “which teach students the love of God and help them meet him, a school where students and teachers pray together, a school where it is clear what the center is.” Through his writings he also reveals the wickers “of a school open to all, in which everyone is important, in which everyone is loved by God and that seeks to transform society, in order to bring it closer to the values of the Kingdom of God”, explains Father General.

The two academic events brought together many students, teachers, as well as members of the Calasanctian family (Piarists, Calasanctian, Calasanziane Sisters, Cavanis, sisters of Provolo), European provincials and collaborators and friends of the Pious Schools.