West African Province. Inauguration and blessing of the juniorate of theology Saint Joseph Calasanz of Abidjan 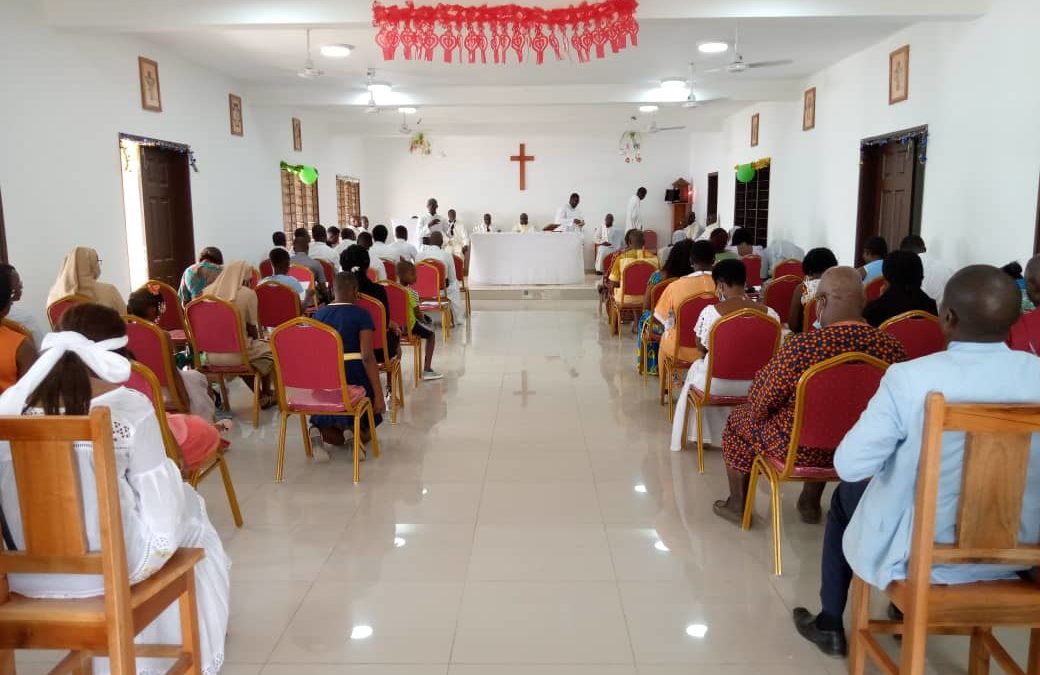 Under a gentle, peaceful and tranquil sun,

Under haggard and mobile glances,

In front of hundreds of people from all over,

In front of the beauty of the building, the inauguration was an asset.

It was on January 2, 2021 that Fr. Pierre Diatta, Father General’s Assistant for Africa, cut the symbolic ribbon, preceded and followed by a blessing from the new building on the outskirts of Abidjan. The ceremony, which began at around 10 a.m. (GMT), was marked by a Mass, which brought together all the brothers from Ivory Coast, the Provincial Assistant for initial training in the person of Fr. Pierre Diomaye Thiare, some priests, religious and religious friends of the community as well as a multitude of faithful. At the end of the Mass, the ceremony was followed by the rite of blessing, the reading of the letter of Father General and the speech of thanks of Fr. Edouard Diedhiou, rector and father master of theology juniors. The celebration ended with the handing over of gifts to some illustrious people.

Addressing, in his homily to all, and especially to the Piarist juniors, the officiant of the day did not fail to insist on the orientation of the new house, thus recalling the identity and mission of each. Continuing his homily, he mentioned Father General’s letter asking that this new juniorate be the place where the richness of the Calasanctian charism is truly lived. Insisting, in the wake, I quote: “No salvation without education.” Education, he says, is the cornerstone on which the future of the world must rest. He invited all fellow Piarists to be authentic religious, and educators available to the mission and models of Christian witness.

Speaking, in turn, Fr. Edouard Diedhiou, Rector and Father Master of the Juniors, began his speech of thanks by thanking God for this precious gift that is the building. He went on to thank Father General, the provincial congregation and the various people who helped build the house, including the contractor and his team, the lawyer, the Piarist pioneers and all people of good will. He went on to quote Fr. Pierre Diatta as: “Only God is strong. For the building, this precious edifice, comes to us thanks to the infinite love of a God who loves the Order founded by his servant Joseph Calasanz.” He also reminded the assembled community and guests that this new two-store building, twenty-six rooms, a large chapel, a large library, a large conference room, a modern laundry room, an elegant kitchen and a large and pretty refectory, is the result of a long journey, made possible today, thanks to Father General Pedro Aguado and his team. He added that the project is only in its first stage. He ended his speech by inviting everyone to remain in the joy of Christmas and enjoy this day of blessing.

After the Eucharistic celebration and blessing, the whole congregation gathered around a fraternal meal to share the wonders of the Lord in the life of the Order in our West African Province and at the same time bear witness to our specific ministry to our friends and recipients of choice.

“So it’s all good that starts well!”