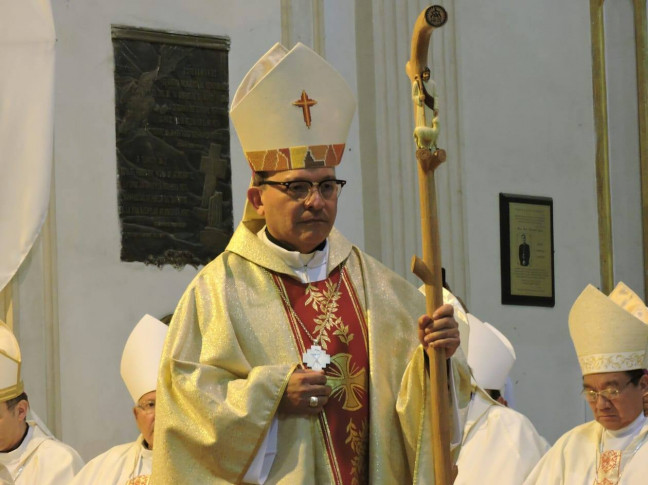 With great joy, we inform you of the appointment that the Holy Father Francisco has made to our brother, Mons. Carlos Curiel, as Bishop of Carora in Venezuela.

Together with the entire Order, we wish him that the Lord bless him in this new service that has been entrusted to him in his native diocese.

Below we transcribe the Bulletin of the Press Office of the Holy See of 30 March 2021 in which this appointment is communicated:

Appointment of the bishop of Carora, Venezuela

The Holy Father has appointed as bishop of Carora, Venezuela, Bishop Carlos Enrique Curiel Herrera, Sch. P., transferring him from the titular see of Carinola and from the office of auxiliary of Cochabamba, Bolivia.

Bishop Carlos Enrique Curiel Herrera, Sch. P., was born on 4 July 1960 in Carora, Estado Lara, Venezuela. Before entering the seminary, he studied medicine and surgery at the Universidad de Los Andes in Mérida from 1978 to 1985 and practiced medicine for several years. He entered the Order of the Scolopian Fathers (Piarists) and studied Theology at the Instituto de Teología para Religiosos in Caracas.

Within the Congregation, he has held the following positions: director of the Colegio San José de Calasanz, rector of the Msgr. Salvador Montes de Oca Community of the Piarist Fathers and chaplain of the penitentiary centers for minors in Valencia; master and rector of the House of Formation of the School Fathers in the vice-province of Venezuela and assistant to the vice-provincial; director of the Msgr. Oscar Arnulfo Romero Educational Unit, parish vicar of San Lorenzo Mártir and president of the House of the School Fathers San José de Calasanz in Barquisimeto.

On 27 December he was appointed as titular bishop of Carinola and auxiliary of Cochabamba and received episcopal consecration on 19 March 2019.