Solemn Profession of Pedro Da Cruz, on the island of Atauro 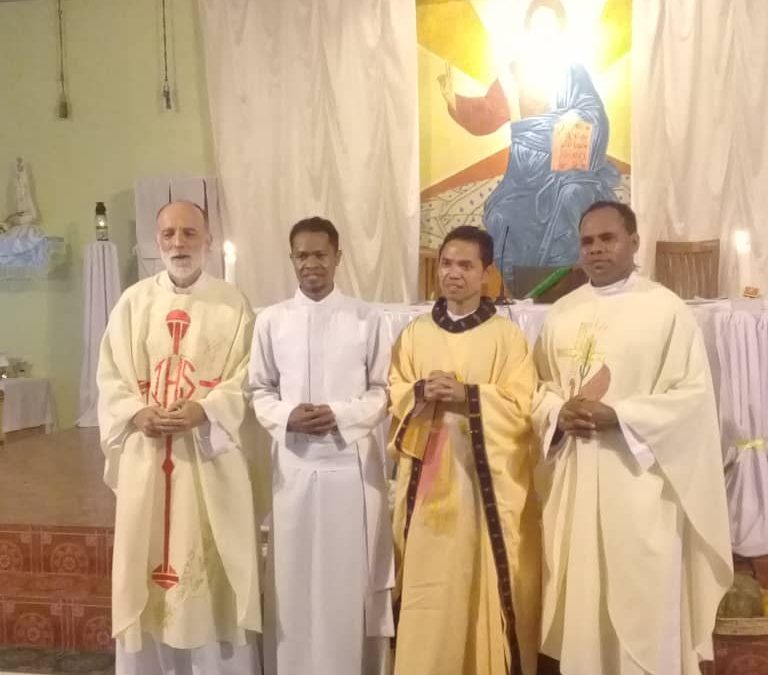 Not having been able to make his solemn vows in Rome last month for visa reasons, it seems that Providence wanted to give the opportunity to Pedro – and to all of us – to celebrate, last August 7, his Solemn Profession with the Piarist community and the Christian community that has accompanied him (and those he has accompanied) these two years, here in Makili.

It is the first thing that caused surprise: to celebrate a Solemn Profession on the island of Atauro! They have never had such an occasion; it is always done in a big city.

We asked to do it in a simple way, Piarist style, but the pastoral council said that it was a feast for everyone, not only for the Piarists, so it was organized with “bigger dimensions”: welcome to all who came (Pedro’s family, Piarist candidates, our brother Julião, parish priest, authorities… and religious of the Company of Mary and Canossians), preparation of a place to cook for everyone, of the chapel, the dining room and of the space – with stage and covering it – for the “festa kultura” that followed the Mass and profession.

Most of the guests came on Friday and Saturday, on the “bero”, the boats that leave Dili around 9 o’clock and arrive two hours later. On Friday, Saturday and Sunday, the Christian community of Makili offered space and food to all.

On Sunday, the mass started at 4 pm. The church was full. Fr. Didimus presided, Fr. Guido (parish priest of the island) concelebrated and Fr. Daniel who barely speaks due to hoarseness. Pedro is accompanied by his aunt and uncle, with whom he has lived in Dili for several years and who represent his family and his deceased parents. During the profession, received by Fr. Daniel by delegation of Fr. Provincial, his uncle Jacinto accompanies him with a candle, representing the Christian formation received in the family since baptism.

After the Mass: the cultural part, with songs, dances, and speeches of congratulations, thanksgiving, history. And dinner in the prepared spaces, for everyone. Then there were songs and dances until midnight.

These were intense days of encounter, service and availability. Pedro has given his definitive yes to the Lord and we are grateful to God, who has called him and accompanied him, and to Pedro who has said his “here I am, Lord”.